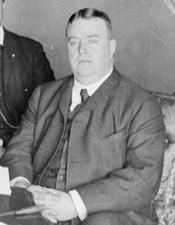 Profile: Byron Bancroft Johnson was born in 1864 in Cincinnati, where his father was a prominent school administrator. The young Johnson played baseball as a boy and later as a student at Marietta College. A big fellow with a square jaw, he was regarded as a steady and fearless catcher who worked without a glove, mask, or chest protector. Although his family wanted him to enter the ministry, Johnson wanted to practice law, and after a year at Marietta he entered the University of Cincinnati Law School.

Soon after leaving school, however, he joined the Cincinnati Commercial-Gazette, specializing in sports writing, for $25 a week. In 1887 he became sports editor. His strong opinions won Johnson both friends and foes in the Cincinnati baseball establishment. One of his closest friends was Charles Comiskey, who became manager of Cincinnati’s National League ball-club in 1892 after winning four pennants in the American Association. The two men spent many an hour discussing how to improve baseball. In particular, they decried the “rowdyism” often found on the playing field.

Ironically, Johnson was a bitter enemy of John T. Brush, the owner of the Cincinnati team and Comiskey’s employer. While Comiskey loyally defended his boss, Johnson attacked him in the newspaper. He believed Brush didn’t spend enough money on the Reds and was allied with other owners who were more interested in making a profit than in ensuring the long-term good of the game. Johnson called him the “past master of parsimony” and a “representative of interests best divorced from baseball.” In 1894 the recently founded Western League, a minor circuit, was looking for a president. Comiskey told Brush that Johnson might make an excellent administrator. Brush got Johnson the job, thereby silencing his sternest critic. The Western League had teams in Indianapolis, Kansas City, Milwaukee, Minneapolis, Toledo, Grand Rapids, Detroit, and Sioux City. When Comiskey’s contract at Cincinnati expired he purchased the Sioux City franchise and moved it to St. Paul. Then he and Johnson began planning for further expansion. Johnson ran his league as a dictator. Vain, forceful, and stubborn, he drafted schedules, arranged travel contracts, signed players, and shifted franchises at will. The team owners, happy with their profits, gave him a free hand.

Soon Johnson’s Western League had a reputation as the best-run minor circuit in the country. Johnson insisted that his umpires crack down on rowdy play. As a result Western League games now were considered family entertainment because sensitive fans would not witness violent behavior or hear bad language there. Attendance increased dramatically. At the same time that the Western League was improving its image, the 12-team NL was falling into disrepute. The Cleveland Spiders and Baltimore Orioles raised rowdyism to an art form, and squabbles among the owners, disregard for the public, and the ill treatment of players outraged the fans. In 1899 when the NL pared back to eight teams, lopping off Cleveland, Washington, Louisville, and Baltimore, Johnson saw an opportunity to expand. At a meeting of Western League officials in October, its name was changed to the American League to give it a more national character. Johnson then announced that the league would expand by placing one franchise in Cleveland and moving Comiskey’s St. Paul club to Chicago.

The Orphans were entrenched in Chicago, and their owner agreed to the invasion of Comiskey’s team only because the NL feared a revival of the old American Association. By giving Johnson the south side of Chicago, the NL thought it was blocking the defunct league. But plans for a new AA never materialized, and by the time the NL figured that out, Johnson had turned the AL into a national entity. In 1901 Johnson, armed with a 10-year contract as AL president, placed clubs in Philadelphia, Boston, Baltimore, and Washington, and retained franchises in Cleveland, Chicago, Detroit, and Milwaukee. The following year St. Louis replaced Milwaukee, and in 1903 New York replaced Baltimore.

Although a few NL owners realized that a second league would spur interest among the fans, increase their attendance, and make a postseason contest possible, most of them preferred to try to crush their new rivals. For two years a “war” raged between the two leagues, but the NL never had a chance. Johnson shored up weak franchises by finding financial backers and moving star players to struggling teams, while the NL foolishly capped salaries at $2,400. As a result, 87 NL players jumped to the new league for more money, and by 1902 AL attendance surpassed that in the NL. The two leagues eventually reached an agreement, establishing a three man National Commission, composed of both league presidents and a third member elected from among the owners, to rule baseball. The third man was Garry Herrmann, president of the Cincinnati Reds and Johnson’s old friend. Although Herrmann was not quite a rubber stamp, he generally sided with the AL president. Johnson was dubbed “the Czar of Baseball”.

Between 1903 and 1920 baseball reached new heights of popularity and prosperity, and truly became the national pastime. Much of the credit goes to Johnson and his firm leadership. He barred liquor from his ballparks, upgraded the umpiring, and continued his crackdown on violence among players and fans. When a new Federal League tried to become a major player in 1914, Johnson led the charge to keep the FL out of the major leagues. However Johnson’s best days were behind him. Beginning in 1916 he antagonized owners in both leagues with several of his decisions concerning players. One person he angered was his old friend, Comiskey, and the two became bitter enemies. During World War I Johnson groveled before politicians to ensure the completion of the 1918 season, upsetting many patriotic fans. Johnson’s influence was on the wane by the 1919 World Series. After the Chicago White Sox lost the first two games, Comiskey reportedly sent Johnson word that a fix might be under way. Johnson allegedly responded, “That’s the yelp of a beaten cur!” and went back to bed. To his credit, when he became convinced that the Series had not been played on the up-and-up, Johnson launched a full investigation, despite knowing that the exposure of a fix could destroy the National Commission and greatly reduce his own power. When the details of the scandal came to light, the triumvirate was replaced by a single man, Judge Kennesaw Mountain Landis. Johnson clashed often with Landis but seldom received any support from the AL owners. At last, in July 1927, Johnson resigned as AL president, refusing to accept any compensation for the eight years remaining on his $40,000-a-year contract. Already ill, his health continued to decline in retirement. Johnson died of diabetes in 1931 at age 67. In 1937 he was named to the Hall of Fame.