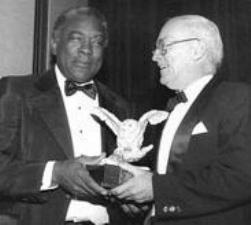 Profile: Bill White was born on January 28, 1934 in Lakewood, Florida. A good athlete Bill White excelled at baseball and caught the eyes of scouts, and was singed to play pro-ball. On May 7, 1956 Bill White made his Major League debut by hitting a Home Run in his first at bat for the New York Giants.

Over the next three seasons Bill White spent time between the majors, and the minors before being traded to the St. Louis Cardinals in 1959. The trade to the Cardinals seemed to jump start Bill White’s career; finally given a chance to play everyday he made the All-Star team for the first time in his career. He would go on to make the All Star Game five times in six years making the squad again in 1960, 1961, 1963, and 1964. Bill White was also one of the better fielding 1B of his time winning the gold glove seven times from 1960-1966. After spending three seasons in Philadelphia with Phillies, White returned to the Cards in 1969 for his final season. In his 13-year career Bill White batted .286 while hitting a solid career 202 Home Runs.

After retiring form the game in 1969, Bill White found a job in the broadcaster’s booth, calling games for the New York Yankees from 1971-1988, becoming the first African-American to do play-by-play regularly for a major-league sports team, as he seemed to find a niche up in the booth playing the straight man to the irreverent Phil Rizzuto on WPIX for 18 years.

In 1987 Los Angeles Dodgers General Manager Al Camapanis stated on Nightline that blacks lacked the intellectual capacities to hold a font office job, creating uproar in the black community while shining a spotlight on the lack of blacks in high positions. When Bart Giammatti left his post as NL President to take over as Commissioner, owners saw an opportunity to give one of the highest positions in the sports world to a black man, and Bill White was chosen and voted unanimously to be the National Leagues next President.

In 1990 problems arose over just how much power Bill White had when he attempted to suspended umpire Joe West for slamming Pitcher Dennis Cook of the Philadelphia Phillies. However, Commissioner Fay Vincent blocked White for laying down any punishment feeling the umpire was with in his jurisdiction. The move demonstrated the decreasing power of the NL Presidency. Bill White would announce his resignation in 1993, giving owners a year to find a replacement.