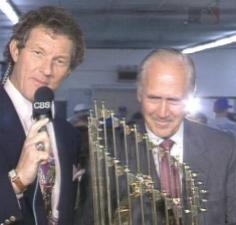 Profile: Robert Brown was born in Seattle on October 25, 1924. A good athlete Brown would make his major league debut with New York Yankees in 1946. He would spend most of his career as a utility infielder batting a career .279 before retiring to pursue a career in medicine in 1954, missing missed a season and a half due to military service during the Korean War.

Brown who was nicknamed “The Golden Boy” during his playing career attended Stanford University and UCLA before receiving his medical degree from Tulane University. During his time at Stanford, he and another student were involved in the rescue of a Coast Guardsman from a plane crash, for which he received a Silver Lifesaving Medal.

After a successful 30-year career as a surgeon in the Dallas-Fort Worth area, Dr. Bobby Brown was called back to the game in 1983, when he was elected President of the American League. Brown a former player dealt swiftly in player punishment suspending Minnesota Twins pitcher Joe Niekro for ten games after an emery board was found by umpires. In 1991 Brown was forced to act again suspending Cleveland Indians OF Albert Belle seven games for throwing a ball at a fan.

In 1994 as Major League Baseball and the Players were going to war over a new Collective Bargaining agreement, Brown resigned and was replaced by Gene Budig.

©MMVII Tank Productions. This site is not affiliated with the American League or Major League Baseball. This site is maintained for research purposes only. Return to AL Presidents.
Page created on May 8, 2002. Last updated on March 8, 2007 at 10:45 pm ET.