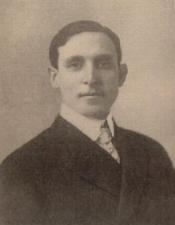 Profile: Harry C. Pulliam was born in Kentucky on February 9, 1865. After leaving college he studied law, but never opened a practice choosing instead to do newspaper work, where he was an authority on baseball. He also worked with the National League’s Louisville Club until 1899, when it was contracted.

Pulliam was not out of work long Louisville’s owner Barney Dreyfuss bought the Pittsburgh Pirates, and took many of Louisville’s best players with him. In addition he took many people he worked with in toe front office including Pulliam. Other NL owners were impressed with Pulliam’s intimate knowledge of the league and its players, and in 1903 he was voted League President.

In addition to being President, Harry Pulliam also filled the roles of the league’s Secretary and treasurer. However after a few years the stress of three jobs began to wear on Pulliam and John Heydler was hired to fill the roles of treasurer and secretary to for Pulliam to work on league affairs in 1907. However, Heydler continued to struggle with health and emotional problems often taking off on trips for weeks without contacting anyone. This worried NL owners to the ability of his service. Other NL owners did not like the fact that Pulliam seemed to let AL President Ban Johnson have all the power on the three-man National Commission on Baseball. The sensitive Pulliam did not take well to criticism and drew deeper into depression.

On July 28, 1909 the unthinkable happened, after a long day Pulliam returned to his room at the New York Athletic Club, and took his own life with gunshot wound to the head. He was only 44. On August 2nd all NL and AL games are postponed, for the first time in history as a tribute.

©MMVII Tank Productions. This site is not affiliated with the National League or Major League Baseball. This site is maintained for research purposes only. Return to NL Presidents.
Page created on May 10, 2002. Last updated on March 2, 2007 at 2:50 pm ET.