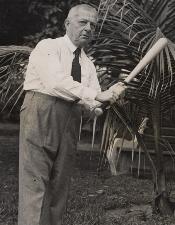 Profile: John Heydler was born on July 10, 1869 in La Fargeville, NY. He started working as a printer’s apprentice at Rochester, NY newspaper at the age of 14. When he was not working he devoted most of his time to sandlot baseball. Heydler would later land a job in Washington as a Government Printer. There he also umpired college and semi-pro games.

Heydler would then go on to find work as a sportswriter, covering the sport he loved. In 1898 he got his first job with National League as an umpire. After just one year he quit to return to sports writing. While working at various papers Heydler proposed the idea of tabulating league leaders, and selling them to newspapers to use.

In 1903 John Heydler returned to work for the National League as its secretary. In 1909 Heydler was suddenly thrust into the position as President when NL President Harry Pulliam killed himself. In Heydler’s short time as President he made a number of innovative changes, including putting a limit on a team’s active rosters to 25, a number that is still the standard today. However Heydler was not retained as President following the season.

John Heydler would take a brief absence form the game before regaining his job as League Secretary in 1914. In 1918 Heydler was thrust into the President’s chair again when John Tener resigned. This time the appointment would be permanent. In his first full season as League President he had to deal with Black Sox scandal following the World Series. Heydler was not very energetic in investigating scandal or in opposing league owners, but he was innovative in his thinking, and he proposed baseball hired a strong willed Commissioner, and supported the appointment of Judge Kennesaw Mountain Landis, even though it would diminish his job.

Heydler would end up serving 16 years as NL President a term that was longer three previous Presidents combined. After Landis took over as Commissioner, Heydler continued to be one of baseball’s top innovators, advocating the establishment of the Designated Hitter in 1928. NL owners overwhelmingly approved the move, but it found little support among owners in the AL and it was rejected. In Heydler’s final years as President he advocated the establishment of the Hall of Fame, and was heavily involved in laying the groundwork for it.

After he retired in 1934, Heydler served on the National League Board of Directors until his death in 1956 at the age of 86.

©MVII Tank Productions. This site is not affiliated with the National League or Major League Baseball. This site is maintained for research purposes only. Return to NL Presidents.
Page created on May 11, 2002. Last updated on March 4, 2007 at 11:45 pm ET.