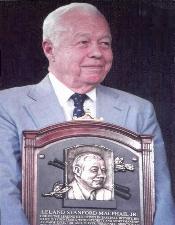 Profile: Born on October 25, 1917 in Nashville, Tennessee Leeland S. MacPhail grew up surrounded by baseball. His father Larry was a renowned baseball man who helped build pennant-winning teams with the Cincinnati Reds, and Brooklyn Dodgers before becoming before becoming of the New York Yankees. While in Cincy MacPhail first came up with the idea of night baseball, and idea he took with him to Brooklyn.

While Larry was building a Hall of Fame resume as team president, Lee was beginning a successful career on his own. In 1941 after graduating from Swarthmore College, he began his baseball career as business manager at Reading in the Interstate League in 1941. As his dad resigned his job as president of the New York Yankees, Lee would get a job with of his own as the Yanks director of player personnel, as position he would hold until 1958.

In 1959 Lee got a chance to run a team all by himself when he was named General Manger of the Baltimore Orioles. MacPhail would remain in that position until 1965, helping to turn a struggling franchise into a contender. In 1966 while MacPhail served as chief administrative assistant to Commissioner William Eckert, the Orioles team he built won its first World Championship. After a year in the commissioner’s office MacPhail got back into the team business when he was named GM of the New York Yankees. He would serve as the Yankees GM until 1973 when he was elected AL President.

As President of the American League MacPhail directed expansion to Toronto and Seattle, helped the continued development of the designated hitter rule. MacPhail was known as a voice of reason and moderation. He would often make swift and firm decisions firing Managers Billy Martin and Earl Weaver several times for abusing umpires.

However, his most notable decision came in 1983 his final year as AL President when he overturned an umpire’s call during a controversial game in New York between the Kansas City Royals and Yankees. The controversy stemmed for an obscure rule regarding a substance known as Pine Tar, the sticky substance used to grip a baseball bat. in the 9th Inning with two outs George Brett hits an apparent two run home run off Rich Gossage to give the Royals a 5-4 lead, only to have it taken away when Yankees manager Billy Martin points out that the pine tar on Brett’s bat handle exceeds the 17 inches allowed in the rules. As a result, Brett is called out for illegally batting the ball, giving New York a 4-3 victory. The Royals would protest the call, and MacPhail ruled in their favor stating the substance did not aid to the HR.

After leaving the post as President MacPhail was named president of the ML Player Relations Committee, representing the owners in negotiations with the players’ association. Thanks in part to MacPhail an August strike in 1985 was settled only after one day of missed games.

MacPhail would remain a valued member of the baseball community in the years since his retirement. He tried to help out during the 1994 strike to try and strike a deal during the devastating strike that wiped out the playoff and World Series. In 1998, Lee MacPhail was inducted into the Hall of Fame 20 years after his father Larry, making the MacPhails the first father-son combination in the Hall. Lee and Larry may some day be joined by Andy, Lee’s son who was the GM for two World Champion Minnesota Twins before taking over as president of the Chicago Cubs in 1994, a role he has held until 2006.

©MXIII Tank Productions. This site is not affiliated with the American League or Major League Baseball. This site is maintained for research purposes only. Return to AL Presidents.
Page created on May 8, 2002. Last updated on January 27, 2013 at 10:45 pm ET.