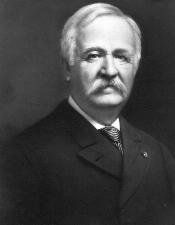 Profile: Born into wealth on December 26, 1837 in East Haddam, Connecticut, Morgan Gardner Bulkeley was a man of great capital and political influence. At the outbreak of the Civil War, Bulkeley enlisted with the 13th New York Volunteers as a private for the Union Army, serving under General George B. McClellan in the Peninsula Campaign and later under General Joseph K. Mansfield. After the Civil War, Bulkeley returned to Morgan & Company. When his father died in 1872, Bulkeley returned to Hartford and helped form the United States Bank of Hartford, becoming its first president, while taking over Aetna Insurance Company a business founded by his father.

After returning to Hartford in the early days of professional baseball, Bulkeley formed the Hartford Dark Blues of the National Association of Professional Base Ball Players in 1874. In 1875, the team featured Hall of Fame pitcher, Candy Cummings, and player-manager, Bob “Death to Flying Things” Ferguson. In 1876, the NAPBBP was replaced by the National League. Hartford was one of the charter members and Bulkeley was named the league’s first president. In his only season as president, he targeted illegal gambling, drinking and fan rowdiness. In the league’s initial season, Bulkeley enhanced Baseball’s image by reducing gambling and drinking. However, after just one season Bulkeley returned to tend to politics and the Aetna Insurance Company, which became the largest in the United States.

In 1880 Morgan Bulkeley a Republican was elected to the first of two terms as Mayor of Hartford. He would then move on to serve four years as Governor of Connecticut, and six years as Senator from 1905-1911. In his term as Senator he was named to the Mills Commission formed by Albert Spalding, the group that gave credence to the myth that Abner Doubleday invented baseball.

Morgan Bulkeley died in Hartford at age 84 on November 6, 1922. The Hartford Bridge over the Connecticut River was renamed the Bulkeley Bridge in his honor after his death. At the time of his death, Bulkeley had been the president of Aetna for 43 years and had increased its assets from $25.7 million to $207 million. He was succeeded by his nephew, Morgan Brainard, who led Aetna for the following 35 years. He would be inducted into the Hall of Fame in 1937, in just the second year of Hall of Fame voting.