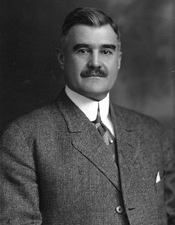 Profile: Thomas J. Lynch was born sometime during the year 1859 in New Britain, Connecticut. His involvement with the National League began in 1888 when he became an umpire.

Lynch would serve as an umpire in the National League for 13 seasons from 1888-1902, calling over 1300 games behind home plate. During his tenure in blue, Tom Lynch had a reputation as being one of the most honest umpires in the game, and was well respected throughout the league, despite at times being brash during arguments. Lynch was instrumental in helping umpires gain greater prestige with in the sport as he would take actions as leaving the field rather than continue the game in face of heavy fan abuse, to preserve the game’s integrity and sportsmanship.

After serving as an Umpire, Lynch worked in the league office until 1910, when he became a compromise choice to biome President of the National League, after the death of Harry Pulliam. He would hold the post for just one four year term as is brusque manner and forthright opinions offended several club owners, who voted to replace him in 1913.

Lynch would return to his native Connecticut and would die at the age 74 in 1924.

©MXII Tank Productions. This site is not affiliated with the National League or Major League Baseball. This site is maintained for research purposes only. Return to NL Presidents.
Page created on May 12, 2012. Last updated on May 10, 2012 at 12:20 am ET.