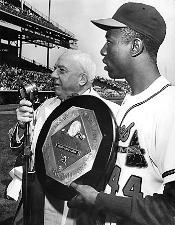 Profile: Warren Crandall Giles was born in Tukwila, Illinois on May 28, 1896. He was raised in nearby Moline, and studied at Washington and Lee University, before enlisting in the Army, where he saw action in France as a Lieutenant in a Mortar Company. When he returned for War he worked in his father’s painting business.

While working in the painting business, Giles life too a sudden turn was elected to run the community owned baseball team in the Triple I league. Giles improved the team right away by hiring Connie Mack’s soon Earl as the team’s manager. The team captured the League’s Championship in 1920 and 1921, before Giles moved on to run the Western league club in St. Joseph, Missouri. After 5 solid years there he moved on to the St. Louis Cardinals Intentional League Team in Syracuse, following them when they moved to Rochester, NY. Along the way the Red Wings captured four straight pennants with a roster full of future Cardinals that would be key contributors to the famous “Gas House Gang”. In addition to running the Rochester franchise, Giles served as President of the International League.

In 1936 Warren Giles finally landed a job in the Majors as the General Manger of the struggling Cincinnati Reds. Within a few years he would transform them into contenders, building a team that captured the NL Championship in 1939, and the World Series Championship in 1940. In 1948 after 12 successful years as GM Giles, was promoted to the position of President by the Reds. Three years later Giles was one of two finalists to fill the post of Commissioner. However the job ended up going to NL President Ford C. Frick. However the job left behind by Frick would end up going to Giles, who had volunteered to take the NL Presidents job to help end the deadlock of NL owners who did not want to search for a replacement for Frick.

Warren Giles would hold the post of NL President for 18 years the longest tenure of any president in the senior circuit. During his nearly two decades at the helm the game underwent massive changes. Through out the 1950’s franchise relocation dominated the headlines with the Braves, Dodgers, and Giants all seeking out new locations. When the later two moved following the 1957 season it left the National League without a New York presence. Giles saw a looming threat for William Shea a prominent Northeast lawyer who proposed the formation of a third League. This was not only seen as threat to the NL, but the AL as well, and a push for expansion was on. In 1962 the NL expanded for the first time in 62 years. In Giles final year as President 1969 the NL would expand again this time adding a team to Canada making Major League Baseball and international sport. 1969 also saw the introduction of Divisional Play, and the League Championship Series. Giles was at the forefront of both changes, saying “The right kind of tradition has made baseball what it is, but blindly following tradition will lead it into a rut. Baseball must always keep pace with the times.’

Warren Giles died on February 7, 1979, as a tribute he was enshrined into the Hall of Fame, and hailed as one of the finest Presidents the National League ever had.

©MVII Tank Productions. This site is not affiliated with the National League or Major League Baseball. This site is maintained for research purposes only. Return to NL Presidents.
Page created on May 12, 2002. Last updated on March 4, 2007 at 11:45 pm ET.