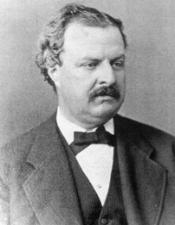 Profile: William Hulbert was born only a few miles from Cooperstown, in Burlington Flats, New York, on October 23, 1832. His parents moved to Chicago two years later, and in 1847 they sent their son to Beloit College in Wisconsin, where he prepared for a life in commerce. After returning to Chicago, he married the daughter of a prosperous grocer and extended that business into a coal dealership.

An incident that occurred in 1874 provided the spark to Hulbert founding of the National League of Professional Base Ball Clubs. This was a time of rampant “revolving,” or contract jumping, and the White Stockings were nervous that their diminutive shortstop, Davy Force, would desert them at season’s end, as he had done with several other clubs. In September 1874 they signed him to a renewal contract for 1875; then they learned that, because the season was still in progress, the contract was invalid by Association rules. Chicago signed Force to another contract in November, but the organization blundered by backdating the contract to September, thus voiding it once again. In December the Philadelphia Athletics offered Force a contract, and he signed it. The Association Council, led by a Philadelphia official, upheld Force’s deal with the Athletics. Similar incidents occurred in 1875 leading Hulbert to call for the founding of a new league.

On February 2, 1876, at the Grand Central Hotel in New York City, William Hulbert met with other large-city magnates and persuaded even the Eastern faction that a new circuit should be founded: the National League of Professional Base Ball Clubs. Straws were drawn for the presidency of the new organization, and Morgan Bulkeley, president of the Hartford entry, drew the short straw. In his year in office he did nothing of note; when he failed to attend the 1877 NL meeting, the other club owners put a halt to the charade and insisted that Hulbert assume the role of president.

The National League was to be founded on principles of square dealing, recognition of contracts, and business integrity. These lofty principles would be reflected on the playing field, no drinking, no gambling, and no play on Sunday. With the strongest National Association franchises signed up for the new NL, the palace revolt was complete. Hulbert’s 8-team league commenced play in 1876, and the National Association simply gave up the ghost.

In 1877, chastened by the New York Mutuals and Philadelphia Athletics, he instituted the practice of determining the clubs’ schedules through the league rather than through club secretaries, as had long been the custom. He also hired umpires to strengthen the public’s confidence in the integrity of the game. Then, with only 15 games left in the season, he met perhaps the greatest challenge of the NL’s formative years: the game-fixing by four Louisville Gray players, Al Nichols, George Hall, Bill Craver, and most notably, star pitcher Jim Devlin. Hulbert swiftly meted out justice, expelling the four for life. The result was to drive Louisville out of the league; when St. Louis and Hartford followed suit, Hulbert scrambled to place franchises in such marginal outposts as Indianapolis, Milwaukee, and Providence still the National League survived.

Harkening back to the Davy Force case, Hulbert commenced the practice of reserving the services of key players for the season following. This, Hulbert thought, would assure the fans and, not insignificantly, the management, that the business of baseball would be characterized by continuity. At first the reserve clause applied to only five players per club, who by and large were pleased to be so designated. To be reserved meant to be assured of a job for the next season. Soon thereafter, of course, the reserve clause came to apply to all players, binding them to one employer for life.

In 1879, Hulbert continuing capacity as owner of the Chicago White Stockings, snatched from the Cincinnati Reds two of their star players, King Kelly and Fred Goldsmith. Then he expelled the Cincinnati franchise from the National League for selling “spirituous and malt liquors” on the grounds, which violated his sensibilities though not, in truth, league statute. In so doing, Hulbert sparked an insurrection of his own: a rival league, the American Association of 1882, centered in the fun-loving, hard-drinking city of Cincinnati. The AA soon became known as the Beer-and-Whiskey League, and it gave the NL a run for its money during the next decade.

William Hulbert was not around to see the AA’s debut. On April 10, 1882, at the age of 49, Baseball’s great architect died of a heart attack. Spalding later wrote, “I ask all living professional Base Ball players to join me in raising our hats to the memory of William A. Hulbert, the man who saved the game!” However when the Hall of Fame was founded Hulbert’s contributions were long forgotten. In 1937 Morgan Bulkeley was elected to the Hall of Fame despite only serving as NL President for one season in which Hulbert did most of his work. Hulbert would not get his full recognition until 1995 when he was finally enshrined in the Hall of Fame.