1914: Owned by Charles Weeghman a local restaurateur, the Chicago Federals were one of the strongest teams in the Federal League. Led by Dutch Zwilling, who was the league’s All-Time leading home run hitter with 29 over two season, including a league high 16 in 1914 and Claude Hendrix who was the Federal League’s top hurler with a record of 29-10 with and an ERA of 1.69. Prior to the start of the season, Weeghman built a stadium for the team, called Weeghman Park, designed by Zachary Taylor Davis, who also designed Comiskey Park for the White Sox. Built at the corners of Waveland Avenue and Sheffield Drive, Weeghman Park was clearly the best stadium in the FL. The Federals would open their stadium with a 9-1 win over the Kansas City Packers on April 23rd, after starting the season with a 2-5 road trip. The Feds led by Player-Manager Joe Tinker hovered near .500 over the first six weeks of the season, before hitting their stride in June. The Federals would post a record of 18-9 as the weather heated up, taking over first place in FL. The Feds would hold on to first place through much of the summer months, before a late August slump. The Federals would battle the Indianapolis Hoosiers during the final month of the season for the Pennant in the Federal League. Chicago would hold a two game lead in the Federal League entering the final week of the season, but costly double header sweep against the Packers would see the Feds slip into second place with a record of 87-67 as the season came to an end.

1915: After not having an official nickname in their first season, Chicago’s Federal League entrant adopted the name Chicago Whales for their second season, with new uniforms that included the logo of a whale inside a large “C” on their jerseys. The Chicago Whales again were one of the top teams in the Federal League, led once again by Dutch Zwilling who powered 13 home runs, while George McConnell was the top pitcher posting a record of 25-10, with an ERA of 2.20. Another pitcher who had a strong season, was the legendary three finger pitcher Mordecai Brown, who posted a record of 17-8. Mordecai “Three Finger” Brown had been the leading pitcher for the Chicago Cubs when they won back-to-back World Series in 1907 and 1908, and after struggling in recent years found a rejuvenation in his return to the Windy City. Despite losing 19 games in August the Whales were in the pennant race right to the end of the season again, this time with a record of 86-66 the Chicago Whales were able to win those final games in the season and capture the Federal League Championship. The Whales actually finished in a virtual tie with the St. Louis Terriers, but had a better winning percentage which was the tiebreaker. Following the season the American and National League would but out owners in the Federal League, getting the third Major League to fold after just two season. The Chicago franchise which was the league’s best team would work out a deal with Charles Weeghman taking over a controlling interest in the National League’s Chicago Cubs. The deal brokered by Future Commissioner Kennesaw Mountain Landis included the Cubs taking over Weeghman Park. The stadium would later become Cubs Park and Wrigley Field and remains the last reminder of the Federal League a century later as it is still home to Cubs on the Northside of Chicago. 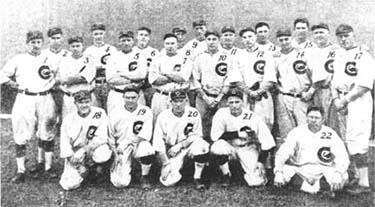 
Adopted the name Whales in their second season.

©MMV Tank Productions. Stats researched by Frank Fleming, all information, statistics, logos, and team names are property of Major League Baseball. This site is not affiliated with the Chicago Whales/Feds or Major League Baseball. This site is maintained for research purposes only. All logos used on this page were from Chris Creamer’s Sports Logos Page.
Page created on August 15, 2015. Last updated on August 15, 2015 at 1:45 am ET.