1915: After winning the Federal League Championship in 1914, the Indianapolis Hoosiers moved to New Jersey and became the Newark Peppers. Owner Fred Sinclair, an Oil Tycoon thought his strong team could draw fans from the established New York teams in the National and American Leagues. Federal League Owners also thought a second team in the Metropolitan Area could help the league grow, but to make the move the Peppers were forced to deal away their best player Benny Kauff to the Brooklyn Tip-Tops who held territorial rights to the New York area. The Peppers played in the 20,000-seat Harrison Park, just across Newark on the Passaic River from where NJPAC now stands. The Peppers attempted to lure Manager John McGraw away from the New York Giants with an offer of $100,000. However, McGraw turned Newark down as Bill Phillips, who had managed the team in Indianapolis remained on the job. The Peppers opened in Baltimore, where they won three straight games against the Terrapins. After losing their next two games in Brooklyn, the Peppers made their Jersey debut on April 16th before an overflow crowd, Newark Mayor Thomas Lynch Raymond threw out the ceremonial first pitch as the Peps Peppers lost to the Terrapins 6-2. The Peppers had their ups and downs posting a 26-27 record before Bill Phillips was relieved of his job on June 18th. Bill McKechnie would take over, in the first of many stops in what would be a Hall of Fame managing career. The Peppers would play much better under McKechine and got back into the pennant chase before September slump ended their hopes of a second straight Federal League title. The Newark Peppers would go on to finish the season with a record of 80-72, placing fifth. The Peppers leading hitter was Vin Campbell who batted .310, while Ed Reulbach won a team high 21 games. Following the season, the Federal League would agree to a buyout, ceasing operations. Newark Peppers owner Fred Sinclair was key during the settlement negotiations, receiving $100,000 over the next ten years, while retaining the right to sell players to any American or National League team of his choosing. One player who would not continue his career was Newark native Rupert Mills. Mills a Notre Dame graduate, who hit .201 had a guaranteed contract for the 1916 season. Rather than accept the $600 buyout, Mills showed up at an empty Harrison Park every day until the start of July for the full $3000 remaining on his contract. Rupert Mills played in the minors until enlisting in World War I, and later served as Undersheriff in the Essex County Sheriff’s Department. 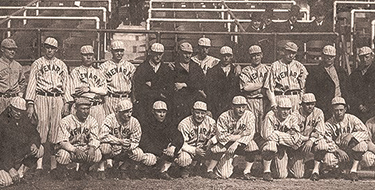 
Pepper is a game that was often played durring warm ups.

©MMV Tank Productions. Stats researched by Frank Fleming, all information, statistics, logos, and team names are property of Major League Baseball. This site is not affiliated with the Newark Peppers or Major League Baseball. This site is maintained for research purposes only. All logos used on this page were from Chris Creamer’s Sports Logos Page.
Page created on August 17, 2015. Last updated on August 17, 2015 at 12:15 am ET.