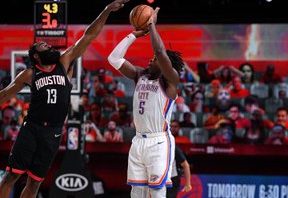 The series between the Oklahoma City Thunder and Houston Rockets went down to the wire, as Game 7 was decided in the final seconds with the Rockets holding on to a 104-102 win. James Harden, hardly known for his defensive prowess, made the big play blocking a shot by Luguentz Dort. On the following inbounds play, the Rockets’ defense blew up the play, not allowing OKC to get the shot off to win the game. The Rockets will now face the Los Angeles Lakers in the second round.