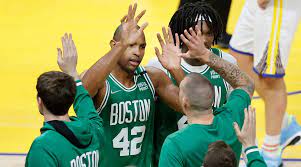 The NBA Finals commenced on Thursday night in San Francisco.  The first Finals game played within the Chase Center saw highs and lows for the home team.

In the first quarter future Hall of Famer Steph Curry hit on 6 shots behind the arc, the most three pointers made by any player in the NBA Finals.  However, it wasn’t enough to thwart the surging Celtics in the fourth 4th quarter.

The Celtics went on their own historic run, outscoring the Warriors 40 to 16 in the fourth quarter.  Behind veteran Al Horford, who turns 36 on Friday.  Horford made his own set of 6 field goals behind the line, finishing with 26 points.

With Jayson Tatum struggling from the field, the Celtics team oriented, well-rounded game proved enough to beat Golden State 120-108.  Game 2 will take place Sunday evening back in the Chase Center again.  The questions remains, will the Warriors be able to close out the Celtics, and play well for four quarters.