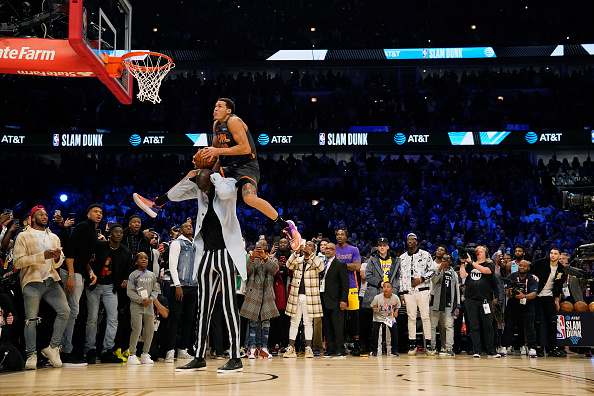 Aaron Gordon of the Orlando Magic had five perfect scores of 50 in the Slam Dunk Contest but is going away empty-handed after Derrick Jones Jr. of the Miami Heat got a birthday present from Heat legend Dwyane Wade and the rest of the judges at All-Star Saturday Night in Chicago. Jones, who got a 46 on his first dunk, was a finalist with Gordon, and the two put on an unforgettable show, each getting 50s on the two final round dunks and again on the first overtime dunk off. It was the second overtime dunk off where things got screwy, as Jones was awarded a 48 while Gordon got a 47 despite leaping over 7’5″ Tacko Fall on his first try. Afterward, Gordon, who also finished in 2016, vowed never to enter the contest again.