Durant-Harden Hold The Magic In Orlando 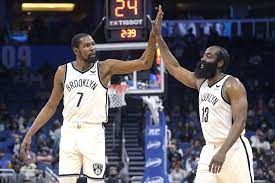 Kevin Durant had his 3rd straight 30 point game as the Nets beat the Magic 123-90.  All-Star forward James Harden also recorded a triple double in Brooklyn’s road win.  The Nets are 8-4 on the year, and have played cohesive basketball without their mercurial star Kyrie Irving.

It remains to be determined if Irving will join the Nets.  In either situation, Brooklyn looks determined to give the defending champion Milwaukee Bucks all they can handle in the Eastern Conference.  Orlando’s record drops to 3-5, while they’re young, Magic fans would have expected more of a spark from their roster potential.

The Nets are in action Friday night in New Orleans, while the Magic host the Wizards Saturday night.