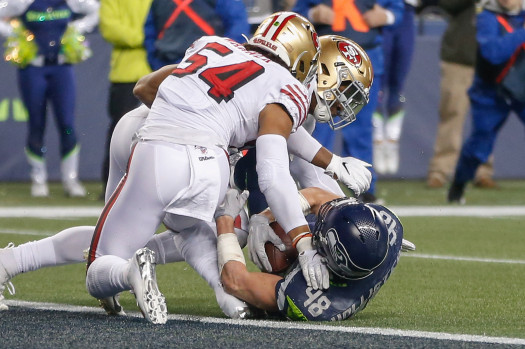 The difference between playing on the road on Wild Card weekend and holding home-field advantage through the end of the playoffs was an eyelash, as the San Francisco 49ers held off the Seattle Seahawks 26-21 at Century Link Field in the final game of the NFL’s regular season. Sunday was the last day of the regular season, with the final playoff spots and playoff positioning on the line. In the shocker of the day, the New England Patriots nine-year streak of holding a bye ended as they were stunned by the Miami Dolphins 27-24 in Foxboro. The Kansas City Chiefs took full advantage by beating the Los Angeles Chargers 31-21. The Patriots meanwhile, will face the Tennessee Titans who beat the Houston Texans 35-14 for the AFC’s last playoff spot. In the NFC, the Philadelphia Eagles won the NFC East by beating the New York Giants 34-17. It was the last game that decided playoff seeding in the NFC as the Seahawks will face the Eagles. The Niners were in control most of the night, but Seattle had a chance to win the game as Russell Wilson drove down the field in the final seconds, but on fourth down, Jacob Hollister was stopped inches away from scoring the winning touchdown.