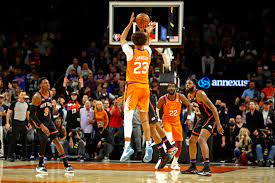 Friday night saw the Knicks travel to Phoenix to take on the Suns without Chris Paul and Devin Booker.  New York came into the game losers of six in a row.  Behind Julius Randle, the Knicks got off to a quick start, up 10 points in the 3rd quarter, but Randle got into an altercation with Suns Forward, Cam Johnson.

Randle was ejected, and the tabled turned in the game.  Behind Johnson’s 9-three pointers, including a buzzer beater, Phoenix came back to beat New York 115-114 without their two best players.  It’s a new low for the Knicks in a season that’s been horrendous by all accounts.

For the Suns, they continue to be the best unit in basketball this year, with a team ethos and collective spirit that is yet to be matched in the league.