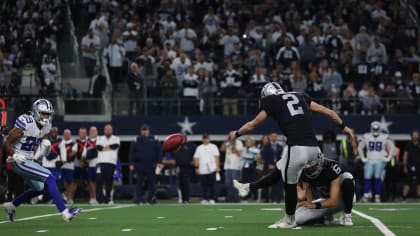 On Thanksgiving day, the Las Vegas Raiders refused to let their season end at AT&T Stadium.  Formally of Oakland, the Raiders have had a tumultuous season off the field, but the players have rallied around interim head coach Rich Bisaccia.

After Dallas’ loss at Arrowhead last week, they sat at 7-3 a-top of the NFC East, yesterday’s failure drops them to 7-4, but they still maintain a 2-game lead in the division.  Dallas has looked a bit disjointed as of late, yet they still control their own destiny.

The game went to overtime after Cowboys kicker Greg Zuerlein made it 33-33 with 19 seconds to go.  Unnerved, Las Vegas put together a solid drive, which was assisted by Cowboys penalties, before Daniel Carlson split the uprights for the win, 36-33.

The Raiders are now 6-5 and firmly in the hunt for a playoff birth. They will host Washington next Sunday for a shot at 7-5.