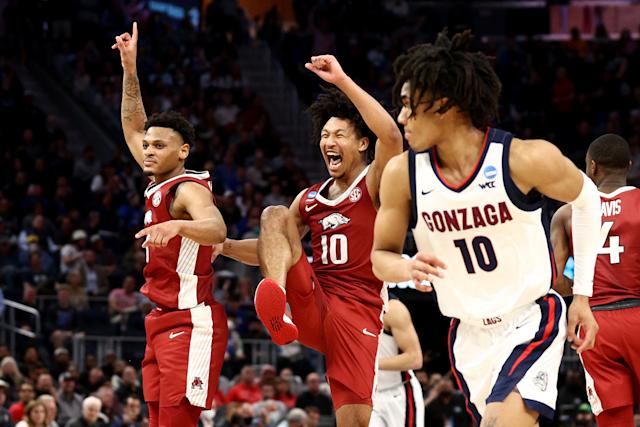 On Thursday night the Sweet 16 tipped-off with the 4 seed Arkansas Razorbacks challenging the overall number 1 seed Gonzaga Bulldogs.  The SEC team that reached the Elite 8 last year, made it back to back trips to the Regional Final, as they upset the Bulldogs 74-68.

In a physical game, star center Chet Holmgren’s early foul trouble cost him a significant amount of time on the court in the first half.  The Gonzaga projected lottery pick didn’t score his first basketball until the second half.  The Bulldogs relied heavily on Drew Timme, who had 25 points, and did all he could to put his team on his back.

It wasn’t enough though, as the Razorbacks wouldn’t go away.  Sophomore forward Jaylin Williams’ stock continues to rise as he had 15 points and 12 rebounds for the 4 seed.  Arkansas controlled the tempo of the game, and never let Gonzaga really make a run in the second half.  Their reward for achieving the upset will be to take on Duke, who is coming off a win vs Texas Tech.