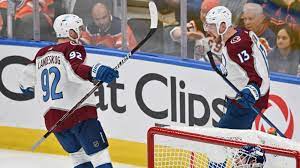 On Saturday night Rogers Place welcomed the Western Conference Final.  Down two games to none, it was essentially a must win for the Oilers, but the Av’s came out on top with a final score of 4-2.

Valeri Nichushkin lit the lamp twice for the Avalanche, as the road team outscored Edmonton in periods two and three.  The win has come at a cost for the Avalanche though, as Nazem Kadri has been ruled out for the remainder of the series, if not longer due to injury.

Game 4 will be on Monday night once again in Edmonton.  Only four teams have come back to win from an 0-3 deficit, and the Oilers will hope that they can become the fifth.  Colorado is now one game away from returning to the Stanley Cup.  The franchise has not won the cup since 2001.