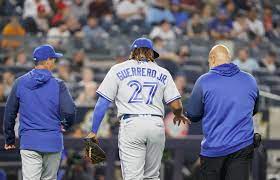 On Wednesday night the Blue Jays continued their away series with division rivalry, New York Yankees. Toronto’s star, Vladimir Guerrero Jr. sustained a deep cut to his right hand.  It wouldn’t hold him back though, as he hit two home-runs in the game, one being a 3-run homer off Yankee’s ace, Garret Cole.

The Blue Jays won the game 6-4, and will now look to take three of four on Thursday night in New York.  While it’s still early in the season, Toronto’s roster seems to be adequately put together to make a legit run at winning the AL East this season.