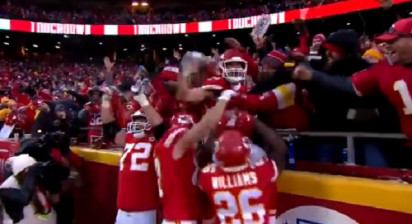 The Kansas City Chiefs are on their way to the AFC Championship Game for the second straight year after they beat the Houston Texans 51-31 in the Divisional Round on Sunday. The game saw the Chiefs spot Houston a 24-0 lead before getting on track in the second quarter. Kansas City got on the board with Patrick Mahomes connecting with Damien Williams on a 17-yard touchdown pass. After the Chiefs scored, the Texans made a questionable decision to run a fake punt. This started a snowball rolling downhill as the Chiefs got two quick touchdown catches by Travis Kelce, sandwiched around a fumbled kickoff. The Chiefs with all the momentum would get a third Kelce touchdown before the end of the half to take a 28-24 lead. The Chiefs continued their momentum in the second half as they scored touchdowns on seven straight possessions.