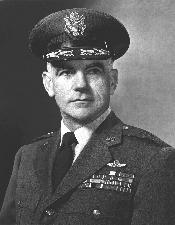 Profile: William Dole Eckert was born on January 20, 1909 in Freeport, IL and grew up in Madison, IN. He graduated from the United States Military Academy in June 1930. It was there he earned the nickname “Spike” while playing football. He then attended the Air Corps Flying Schools at Brooks and Kelly Fields in San Antonio, TX and graduated in October 1931.

In 1938 he was selected as one of two officers for advanced education at the Harvard Graduate School of Business Administration and graduated with a Master’s Degree in June 1940. Eckert continued his work in the military until his retirement in 1961. In 1957 at the age of 48, he was commissioned lieutenant general, making him the youngest three star officer in the United States Armed Forces. On the day of his retirement from the Air Force, he was awarded the Distinguished Service Medal.

In the years following his retirement, Eckert worked as a management consultant to the aviation industry. He was serving on the boards of directors of several corporations at the time he was appointed Commissioner. More than 150 names appeared on the original list of nominees for the commissionership following Ford Frick’s retirement. The club owners could not decide if baseball’s new leader should come from the ranks of the game, or elsewhere. They finally decided that the new Commissioner should gave a strong business background to deal with the problems then confronting the game, and on November 17, 1965 by a unanimous vote of the 20 major league club owners, General Eckert became the fourth commissioner of baseball.

Eckert’s election caught the news media by surprise. Although his corporate experience made him an attractive candidate and his name did appear on the original list of 156 candidates, he was never mentioned publicly.

Although only in office a few years, Eckert is often credited with making baseball a more efficient organization. He developed more effective committee actions, streamlined business methods and helped stabilize franchises with bigger stadiums and long-term leases. Eckert, like Frick, also worked hard toward promoting the game internationally. His friendly relations with Japanese baseball officials paved the way for the Los Angeles Dodgers to visit Japan after the 1966 season. He also arranged subsequent visits to Japan by other major league teams.

However, health problems would become an issue for Eckert, and he was forced to leave office after just three years in December 1968. He died on April 16, 1971, at the age of 62.

©MVII Tank Productions. This site is not affiliated with the Major League Baseball. This site is maintained for research purposes only. Return to MLB Commissioners.
Page created on May 2, 2002. Last updated on March 10, 2007 at 12:10 am ET.