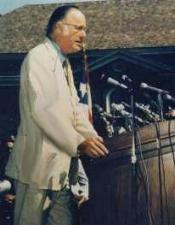 Profile: Bowie Kuhn was born in Takoma Park, MD, a suburb of Washington, DC, on October 28, 1926. He grew up in the nation’s capital, graduated from Theodore Roosevelt High School, before attending Franklin and Marshall College in the Naval V-12 Officer Training Program before going to Princeton University in 1945. He graduated from Princeton with honors in 1947 with a Bachelor of Arts degree in Economics. He received his law degree in 1950 from the University of Virginia where he served on the editorial board of the law review.

Following his graduation from law school, Kuhn became a member of the New York law firm Wilkie, Farr and Gallagher, chosen because it represented the National League. He spent the next 19 years working in baseball’s legal affairs and was counsel to the NL in the lawsuit brought against it by the City of Milwaukee when the Braves moved to Atlanta. He also served as counsel for negotiations between the Major League Players Association and the club owners.

When General William Eckert left the Commissionership, the team owners decided that baseball’s next Commissioner should be familiar with baseball’s business, rules and the people. The race came down to two candidates, Mike Burke, president of the New York Yankees and National League President Chub Feeney, with the ballots being split along league lines. During the impasse, Kuhn was mentioned as a possible compromise candidate and the response was overwhelming in his favor. He was elected by unanimous vote on the first ballot becoming baseball’s 5th commissioner.

In less than one month in office, Kuhn had helped solve the biggest issue facing baseball by negotiating a new three year contract between the owners and the Players Association. The settlement came after more than 40 negotiating sessions and prevented what could have been baseball’s first strike in the spring of 1969.

Kuhn presided over a tumultuous time in baseball. Among the notable events was the Curt Flood reserve case of 1970. Flood was traded by the St. Louis Cardinals to the Philadelphia Phillies, but refused to report to his new team. Instead, the outfielder initiated legal action against baseball, challenging the legality of the reserve clause and the right of clubs to trade players at will. Ultimately, the U.S. Supreme Court upheld the lower courts decisions in favor of baseball, ruling that federal antitrust laws did not apply to the game. In 1975, players were granted the right to free agency for the first time. In the Andy Messersmith-Dave McNally case, arbitrator Peter Seitz ruled that players were free to negotiate with any club after the option year of their contracts expired. After several bargaining sessions, the players and owners agreed to the current modification that grants players the right to free agency after six years in the majors.

Bowie Kuhn returned the All-Star Game voting to the fans, presided over a new and lucrative television contract, and brought the 1972 strike to a speedy conclusion. Kuhn acted boldly, more so than any of his predecessors in his dealings with owners and players In 1976, Kuhn was also involved in a lawsuit with Oakland Athletics owner Charles O. Finley, who wanted to sell three of his players for $3.5 million. Kuhn blocked the move claiming it was “not in the best interests of baseball,” and Finley sued. Kuhn prevailed in court, a decision that reaffirmed the powers of the Commissioner. He also cracked down on George Steinbrenner of the New York Yankees 2-year suspension for illegal campaign contributions to Richard Nixon in 1974. Ted Turner of the Atlanta Braves also received a one-year suspension after making manager in 1977.

He met the emerging drug problem directly, despite opposition from owners who felt that acknowledging involvement made baseball “look bad,” and from the MLBPA, which resisted all disciplinary measures imposed by the commissioner. Even greater furors arose when he forced Willie Mays and Mickey Mantle to sever their association with baseball while working for gambling casinos, and acceded to television’s demand for World Series games in prime-time hours at night.

Under Kuhn, the major leagues endured a 57-day players’ strike in 1981. Also during his tenure Major League Baseball grew from 20 to 26 teams and attendance increased from 23 million fans in 1968 to 45.5 million in 1983. However, five National League owners were unalterably disaffected. Lingering unhappiness with the costly 1981 strike and its aftermath was a burden. A proposal for more equitable sharing of broadcasting revenues among rich and poor clubs was a new and divisive problem. There were renewed calls for restructuring; magnates now said they wanted a chief executive officer-a real corporate CEO with the business skills to guide them through the complexities of baseball in the contemporary world.

In the voting, the NL dissidents held firm. In addition there were three inconsequential “no” votes among AL owners. With only 18 out of 26 owners on his side-a 69 percent approval rating-Kuhn failed to get the necessary three quarters majority in each league for another term. Kuhn overstayed his term by a year until Peter V. Ueberroth, head of the Los Angeles Olympic Organizing Committee, was unanimously elected to a five-year term in October 1984. Kuhn left office on September 30, 1984 serving 15 years as Commissioner is the secondlongest tenure at the time to Kenesaw Mountain Landis’ 23 years.

After leaving office, Kuhn went back into legal practice, and served on several boards including the Catholic Advisory Board. Kuhn who was the tallest commissioner died of pneumonia on March 15, 2007 in Jacksonville, FL.

©MVII Tank Productions. This site is not affiliated with the Major League Baseball. This site is maintained for research purposes only. Return to MLB Commissioners.
Page created on May 2, 2002. Last updated on December 14, 2007 at 10:30 pm ET.