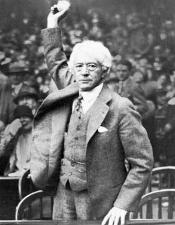 Profile: Born the sixth of seven children in Millville, OH, Kennesaw Mountain Landis received his colorful name from Kennesaw Mountain, Georgia, where his father, Abraham Landis, had been seriously wounded during the Civil War. Ken, as he was called, was an avid baseball fan, and at age 17 he played on and managed the team in Logansport, IN, where he grew up.

Landis dropped out of Logansport High School and accepted a job as a clerk in the South Bend, IN courthouse. He took pre-law courses at the University of Cincinnati and obtained a law degree at Union Law School, now Northwestern University, in Evanston, IL. He graduated in 1891 and opened a law practice in Chicago. In March 1905, President Theodore Roosevelt appointed Landis a United States District Judge for the Northern District of Illinois, a position he held when offered the position of Baseball Commissioner.

During his Judicial Career, Landis dealt with several cases of historical significance. In 1907, he presided over a Standard Oil antitrust trial fining them $29 million for accepting rail freight rebates, although the verdict was later set aside. In 1918, he held the trial of over 100 members of the Industrial Workers of the World for supposed violation of the Espionage Act of 1917. He also presided over the trial of several Socialist Party leaders, including Milwaukee editor and Congressman Victor Berger. While Landis oversaw the convictions of many in these trials, most of the verdicts were reversed on appeal, or nullified by presidential pardon. Was instrumental in getting African-American heavyweight champion Jack Johnson banned from the sport by charging him with transporting a white woman over state lines. The end of Landis’ judicial career overlapped his duties as baseball commissioner, a position he accepted in November, 1920. In February, 1922, Landis resigned his position as a Federal judge saying that, “There aren’t enough hours in the day for me to handle the courtroom and the various other jobs I have taken on.”

While he often found time to attend games at both Comiskey Park and Wrigley Field in Chicago, Landis first became professionally involved with baseball in 1914, when he presided over the Federal League’s injunction suit against the Major Leagues. During his involvement with the suit, Landis spent considerable time studying baseball history. This, along with his background, made him a prime choice for Commissioner.

The owners approached Landis shortly after the 1919 World Series, when the “Black Sox” scandal ripped through baseball. Landis accepted the post on the condition that he kept his job as a judge, have full autonomy as commissioner (a post created for him), and that his baseball salary ($50,000) be decreased by the amount he received as a judge ($7,500). He exercised his authority frequently and to the fullest during his tenure. Determined to maintain the integrity of the game, he banned 8 Chicago White Sox (Chick Gandil, Eddie Cicotte, Lefty Williams, Happy Felsh, Swede Risberg, Fred McMullen, Buck Weaver, and Shoeless Joe Jackson) involved in the 1919 “Black Sox” scandal in one of his first acts as Commissioner.

Others banned during Landis’ tenure as Commissioner included New York Giants outfielder Benny Kauff for theft and receiving stolen property (1921); Giants pitcher Phil Douglas for suggesting he would leave the club to make the Giants lose the pennant (1922); Giants rookie Jimmy O’Connell and coach Cozy Dolan for attempting to bribe an opposing player (1924); and William D. Cox, president of the Philadelphia Phillies, for betting on ball games (1943). Landis also barred Babe Ruth and Bob Muesel of the New York Yankees from the first 40 games of the 1922 season for barnstorming without permission following the 1921 World Series.

Kenesaw Landis also tried to curb the growth of minor league farm systems by innovators such as Branch Rickey, in the name of protecting the lower levels of professional ball. Landis argued that because a parent club could unilaterally call up players from teams which were involved in pennant races, the organization was unfairly interfering with the minor competitions; his position was that the championship of each minor league was of no less importance than the championships of the major leagues, and that minor league fans and supporters had the right to see their teams competing as best they could. Yet he also prevented the formation of a powerful third major league when he stopped Pants Rowland from upgrading the Pacific Coast League in the 1940s.

Landis was also a firm segregationist, and was opposed to allowing black players to play Major League Baseball. He even went as far to block Bill Veeck’s purchase of the Philadelphia Phillies in 1944 for suggesting he would stock their roster with players from the Negro Leagues. Landis was such a strong and imposing figure that nobody else, including Brooklyn Dodgers Branch Rickey would challenge him on the issue of breaking the color barrier, and during his tenure his tenure black had no other option, but to form their own league.

In his final nine years as Commissioner he was often in poor health, and on November 25, 1944, eight days after being elected to a new seven year term, he died at St. Luke’s Hospital in Chicago at the age of 78. Whether his decisions were praised or criticized, he was satisfied with being respected and feared. Dubbed ‘the baseball tyrant’ by journalists of the day, his rule was absolute. In the context of ensuring the integrity of the game itself, baseball historians generally regard him as the right man at the right time when appointed, but also as a man who perhaps held office too long. However his contribution to the game still is still well recongized as he was elected to the Hall of Fame in 1945, while Major League Baseball’s Most Valuable Player Awards in the National and American Leagues are officially known as the Kenesaw Mountain Landis Award in his honor.

©MVII Tank Productions. This site is not affiliated with the Major League Baseball. This site is maintained for research purposes only. Return to MLB Commissioners.
Page created on May 6, 2002. Last updated on March 10, 2007 at 12:10 am ET.