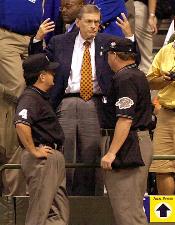 Profile: Alan H. Selig was born on July 30, 1934 in Milwaukee and received a bachelor’s degree in American History and Political Science from the University of Wisconsin in 1956. After serving two years in the armed forces, Selig returned to Milwaukee and began working in the automobile business with his father. Selig maintains a tie to that industry as president of the Selig Executive Lease Company.

A life-long baseball fan, Selig followed the old Milwaukee Brewers minor league team and the Chicago Cubs while growing up. He became a Braves fan when the National League franchise moved to Milwaukee from Boston in 1953. He subsequently became the team’s largest public stockholder before selling his stock in 1965 when the team moved to Atlanta.

Upon learning of the Braves’ intended move to Atlanta, Selig founded “Teams, Inc.” an organization dedicated to returning Major League baseball to Milwaukee. The group, which later changed its name to “The Brewers”, arranged for several Chicago White Sox games to be played in Milwaukee in 1968. After failing to purchase the White Sox in 1969, Selig’s efforts were finally rewarded on April 1, 1970, when a Seattle bankruptcy court awarded the Seattle Pilots franchise to Selig and his investors.

The Brewers appeared in the 1982 World Series, losing to the St. Louis Cardinals in seven games. The club won seven “Organization of the Year” awards during Selig’s tenure as club president, including the Topps “Organization of the Year” award in 1992, 1991, 1989 and 1987. In addition, the Brewers won an unprecedented three straight Baseball America awards from 1985-87.

Bud and his wife, Sue, have been very active in the Milwaukee community and were co-recipients of the “1990 Humanitarian Award” from the St. Francis Children’s Center. They also lend their support and time to the Milwaukee Art Museum. In July of 2001 the Allan H. and Suzanne L. Selig Merit Scholarship Fund was established at the Rothberg International School at the Hebrew University of Jerusalem.

Selig was at the front lines of the players strike in 1994, helping to keep owners unified in their fight with the players association. Without a true commissioner it was feared by many players Selig would unilateral implement the owners plan and the players strike began on August 12th. The strike dug on with no end in sight, and without a true commissioner, there was nobody to broker a deal in time to save the World Series. Baseball was at the lowest point ever when Selig cancelled the remained of the season including the World Series in September. The strike dragged on until the start of the new season as replacement players were used in Spring Training. Just before the start of the regular season a federal judge granted an injunction forcing baseball to go back to the previous CBA. Eventually the two sides would reach a new agreement but the damage was irreversible in some places.

Selig served a dual role as President of the Milwaukee Brewers Baseball Club and Chairman of the Executive Council until his official appointment as Commissioner on July 9, 1998. As Chairman of the Executive Council, and then as Commissioner, Selig’s ability to rule by consensus brought about numerous dramatic changes to baseball, including Interleague play, and an extra tier of playoffs and the Wild Card. This consensus would also lead to the elimination of the NL and AL presidency, which brought the control of the umpires solely to Major League Baseball meaning umpires, would now work both leagues.

Despite presiding over the game during a troubled period that included a 272-day player strike in 1994 and 1995, Selig is in the process of guiding the game through a significant renaissance. Major League Baseball set an attendance record in 2001, as 73,500 million fans attended games at the 30 ballparks. It marked the fourth consecutive season in which attendance surpassed 70 million.

Despite much criticism Bud Selig would become the first Commissioner to get a Collective Bargaining Agreement without a work stoppage when he brokered an 11th Hour deal in August of 2002. In the following years amidst talks of possible contraction the Montreal Expos, a franchise long in franchise ruin was taken over by the league as a new location and a new owner was sought. The league would own the Expos until 2006, a year after they had moved to Washington becoming the Nationals.

The 2002 Labor Peace also gave Owners its first revenue sharing plan, enabling many teams who had previously claimed to be unable to compete a chance to win a World Series. While teams like the New York Yankees are still able to outspend everyone a luxury tax has narrowed the gap between rich and poor clubs, helping teams like the Florida Marlins stun the Bronx Bombers in the 2003 World Series, while the Boston Red Sox and Chicago White Sox each ended there long droughts without a championship in 2004 and 2005 respectively. When the 2002 CBA expired in 2006, it would quickly and quietly be renewed another five years without any animosity.

While Baseball was finally able to achieve Labor Peace, another dark cloud has arisen to challenge the integrity of the game. Performance Enhancing Drugs. While the Home Run helped baseball recover from the 1994 strike, with the great chase of 98′ as Mark McGwire and Sammy Sosa perused the single season home run record of Roger Maris, which was followed up in 2001 as Barry Bonds broke McGwire’s record of 70 by hitting 73 homers.

As the 2003 season came to an end, a small federal police raid served as the wake up call to baseball as well the entire sports world, as the Nutritional Supplement company BALCO was charged with supplying athletes with steroids and other performance enhancing drugs, including HGH (Human Growth Hormone). While the 2002 CBA included steroids testing for the first time, the penalties were laughably light, with a first positive test being kept private, and suspensions only begging afterward and starting at only 10 games.

Things grew even worse as Barry Bonds, Gary Sheffield, and Jason Giambi were among a number of players called to testify before a Federal Grand Jury in the BALCO Case. Bonds had deep ties to BALCO, with his trainer Craig Anderson among those charged with supplying Performance Enhancing Drugs. Their Grand Jury testimonies w would all be leaked, with Giambi confessing use of steroids, while Bonds who was less then forth coming came under investigation himself for perjury.

On the heels of BALCO came a book that exposed steroids use through out the majors, written by one of the stars who used steroids himself Jose Canseco, who would detail how he taught players such as McGwire and Rafael Palmeiro how to use steroids, and how their power numbers improved, as the home run revival became tagged as “The Steroids Era.”

In 2005 the Federal Government became involved as several baseball stars, along with Bud Selig were called to testify before Congress. In the hearing baseball was given a strong warning that if they continued to look the other, way the US Government would become involved. This fear enabled baseball to toughen its testing of steroids and punishment as a first offense now means a 50-game suspension. However with no proven test for HGH there remains much doubt over the achievements of today’s stars including Barry Bonds taking ownership of baseball most prestigious record the career Home Run record of 755 held by Hank Aaron, which was broken in 2007.

As baseball finally was able to establish a testing and punishment policy for Performance enhancing drugs, the game continued to thrive. In 2009, the league launched its own cable channel, MLB Network. Though it was the last of the four major professional leagues to launch its own cable network, MLB Network has been nothing short of a success, with live games, classic games, news and analysis all year long.

The health of the game was on fine display in 2011, as the NFL and NBA dealt with labor issues, Major League Baseball and the Players Association quietly and peaceful passed a new Collective Bargaining Agreement. This was something unheard of when Bud Selig’s tenure as Commissioner began two decades earlier. In fact MLB has had its longest stretch of labor peace dating back to the end of the 1994 World Series killing strike, as they have worked out two CBAs without any work stoppages disturbing the game of baseball. The health of the sport could not be any better as Selig remained commissioner until the end of the 2014 season, just passed his 80th birthday, turning the post over to his top lieutenant Rob Manfred.

©MXV Tank Productions. This site is not affiliated with the Major League Baseball. This site is maintained for research purposes only. Return to MLB Commissioners.
Page created on May 3, 2002. Last updated on April 25, 2015 at 1:05 am ET.