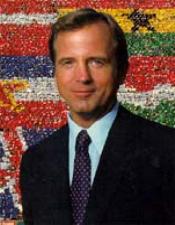 Profile: Peter Victor Ueberroth was born in Evanston, IL on September 2, 1937. He was raised in Northern California and lettered in football, baseball and swimming while at Fremont Union High School. He attended San Jose State University on an athletic scholarship lettering in water polo. He competed in the 1956 United States Olympic water polo trials but did not make the team. Ueberroth graduated in 1959 with a degree in business.

Ueberroth launched a career in the travel industry, and at the age of 22, became a vice president and shareholder in Trans International Airlines. Ueberroth worked at Trans International until 1963 when he founded his own travel company, which would become First Travel Corporation. When he sold the company in 1980, First Travel Corp. was the second largest travel business in North America.

Peter Ueberroth went on to serve for five years as president and CEO of the Los Angeles Olympic Organizing Committee, a private, non-profit organization responsible for staging and operating the 1984 Los Angeles Olympic games. Under Ueberroth’s leadership and management, the first privately financed Olympic games resulted in a surplus of nearly $250 million, which was used to support youth and sports activities throughout the United States.

Major League Baseball owners elected Peter Ueberroth baseball’s 6th Commissioner by a unanimous vote of the 26 club owners in Tampa, FL on March 3, 1984, with him taking over on October 1st after the Olympics, and regular season ended. Ueberroth’s commissionership began in crisis, with the Major League Umpires Union threatening to strike the post-season. The new Commissioner arbitrated the disagreement and had the umpires back to work before the League Championship Series were over. For his work with the Olympics and baseball Ueberroth was named Time Man of the Year in 1984. The next summer, Ueberroth worked behind the scenes to limit a players’ strike to one day before a new labor agreement was worked out with the Players Association. In addition he ended the exiles of Mickey Mantle and Willie Mays, who had been suspended for working with casinos.

Ueberroth’s tenure was marked by increased attendance (record attendance four straight seasons), greater awareness of crowd control and alcohol management within ballparks, a successful and vigilant anti-drug campaign, significant industry-wide improvement in the area of fair employment, and a significantly improved financial picture for the industry.

When Peter Ueberroth took office, 21 of the 26 clubs were losing money; in 1988 Ueberroth’s last season all clubs either broke even or finished in the black. In 1987 for example, baseball as an industry showed a net profit of $21.3 million, its first profitable year since 1973. Before leaving office, Ueberroth negotiated two landmark television deals – a four-year, $1.1 billion contract with CBS, and a four year $400 million national cable deal with ESPN. Ueberroth decided not to seek a second term and helped promote the election of his successor, National League President A. Bartlett Giamatti in 1989.

After leaving the post of commissioner Ueberroth returned to private enterprise, but was again tapped for public duty in his greatest challenge: to lead a taskforce was to help rebuild Los Angeles after the 1992 riots. In 1999, Ueberroth along with Arnold Palmer and Clint Eastwood bought the Pebble Beach golf course.

Several years later Peter Ueberroth would run for Governor of California in the 2003 California recall election as an independent, though he was a registered Republican. His campaign focused on California’s economic and budget crisis, avoiding social issues. With polls indicating only a low level of support, he pulled out of the race on September 9, 2003, though his name still appeared on the ballot and received a small but significant amount of votes. He placed sixth in a field of 135 candidates.

©MVII Tank Productions. This site is not affiliated with the Major League Baseball. This site is maintained for research purposes only. Return to MLB Commissioners.
Page created on May 2, 2002. Last updated on March 10, 2007 at 1:05 am ET.