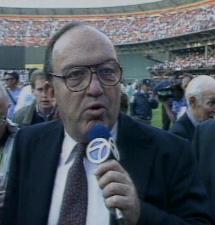 Profile: Francis T. Vincent Jr. was born on May 29, 1938 in Waterbury, Connecticut. After attending The Hotchkiss School in Lakeville, Connecticut, Vincent graduated with honors from Williams College in 1960 and received his law degree from Yale in 1963.

Upon graduation from Yale, Vincent became an associate in the New York law firm of Whitman and Ransom. He was named a partner in the Washington, DC law firm of Caplin and Drysdale in 1968, where he specialized in corporate banking and securities matters. It was during this time that Vincent also served as Associate Director of the Division of Corporate Finance of the U.S. Securities and Exchange Commission.

In 1989 Major League Baseball appointed Fay Vincent to the new post of deputy commissioner. As Deputy Commissioner, Vincent played a pivotal role in the investigation of gambling allegations against Pete Rose, baseball’s all-time hits leader. Based on findings of the investigation, Rose agreed to a lifetime ban from professional baseball. Shortly after the Rose scandal rapped up Commissioner Bart Giamatti suffered a fatal heart attack. Vincent was then chosen to finish out Giamtti’s five year term as commissioner of Major League Baseball.

The remainder of Vincent’s term was also marked by turmoil. With the players locked out of spring training, Vincent entered negotiations between Major League Baseball and the Major League Baseball Players Association in February 1990, after talks between the two parties had stalled. A settlement was reached on March 18, by then some 32 days into the spring training schedule. Due to the lockout, Opening Day was delayed one week to provide adequate time for spring training, but the settlement ensured that a full slate of 162 games could be played.

Baseball saw the addition of two new National League teams during Vincent’s tenure, bringing the number of Major League Baseball franchises to 28. In the first expansion since 1977, baseball announced that Denver, Colorado and Miami, Florida had been granted expansion teams that would begin play in 1993. In June 1991, Vincent declared that the American League would receive $42 million of the National League’s $190 million in expansion revenue and that the AL would provide players in the National League expansion draft. This decision marked the 1st time in expansion history that leagues were required to share expansion revenue or provide players for another league’s expansion draft.

Vincent also took an active role in policing owners, suspending New York Yankees owner George Steinbrenner for hiring known gambler Harold Spira to investigate Dave Winfield. As baseball’s collective bargaining agreement was about to expire owners, were afraid Vincent would short-circuit their attempts at breaking the player’s association. With owners getting set for a prolonged labor dispute owners held a no confidence vote in Vincent and asked him to resign. His term as Commissioner ended a week later when he resigned on September 7, 1992.

After stepping down from the commissioner’s office, Vincent became a private investor and the president of the New England Collegiate Baseball League. Vincent would serve as the NECBL’s president from 1998 to 2003.

©MMVII Tank Productions. This site is not affiliated with the Major League Baseball. This site is maintained for research purposes only. Return to MLB Commissioners.
Page created on May 3, 2002. Last updated on March 10, 2007 at 1:30 am ET.