2005: Jorge Vergara owner of the legendary Mexican League franchise Chivas de Guadalajara starts an MLS franchise in Los Angeles. Hoping to reach out to LA’s large Mexican community, he names the team Chivas USA to honor his famous 10-time Mexica League Championship team. Like many sports expansion teams, Chivas’ first season would be a tumultuous one. Starting with a 2-0 shutout loss on opening day against defending champions DC United, the team would suffer a tremendous downward spiral, winning their first game on May 7 against expansion counterpart Real Salt Lake and then go winless in June, August, and September. There would also be a coaching carousel for Chivas. After Thomas Rongen was fired in midseason, Javier Ledesma would give it a try before the team settled on Dutchman Hans Westerhoff for the rest of the season. At season’s end, Chivas would find themselves in last place in MLS with a record of 4-22-6. Providing glimmers of hope for Chivas would be new coach Bob Bradley and up-and-coming players such as Ezra Hendrickson, Brad Guzan, and Ramon Ramirez. The brightest spot for the team had to be a 1-0 win over eventual Eastern Conference champions New England Revolution on July 22

2006: After a horrific first year of existence, Chivas rebounded nicely with the help of new coach Bob Bradley and eventual Rookie of the Year Jonathan Bornstein. Consistent play by the team and acclimation to the league helped Chivas to an impressive 2nd year record of 10-9-13 and qualified for the playoffs for the first time. The team would have the LA soccer spotlight to themselves for the first time as the LA Galaxy failed to make the playoffs. Against the Houston Dynamo, Chivas USA stole a 2-1 victory, with Brad Guzan stopping a penalty kick in the closing seconds of the game. But in the next match, Chivas would have the tables turned on them with Dynamo scoring two goals to tie the series, and Brian Ching scored the series winner at the very end of stoppage time to eliminate Chivas. A huge postgame fight put a sad end to a successful season for the club.

2007: In what proved to be a record-breaking year for the club, Preki took over as coach, and Chivas USA jelled as a team and became the class of the West. Among the many bright spots was the acquisition of Maykel Galindo, who scored 12 goals on the year, and Ante Razov continued to show he had a lot left in the tank playing alongside him. A perfect August propelled Chivas USA to a solid 15-7-8 record and the top spot in the Western Conference. This would not lead to an improvement in the playoffs as they were beaten by the Kansas City Wizards, 1-0 on aggregate.

2008: Chivas USA got off to a good start, as they were in a first-place battle with the LA Galaxy much of the first half. However, in the middle of the season the were forced to play without star midfielder Sacha Kljestan, who was playing for the US National Team in the Beijing Olympics, while their star goalkeeper Brad Guzan, who was sold to Aston Villa FC However, they were able to still make the playoffs, by finishing in second place with 12-11-7 record. The playoffs would see a quick exit as they were bounced by Real Salt Lake 3-2 aggregate score.

2009: In their fifth year in existence, Chivas got off to an impressive start, winning seven of their first ten matches to climb to the top of the West early on. After that, though, the club would begin to slump, although earning a wild card spot with a record of 13-11-6. Chivas would play the LA Galaxy, the team they share the Home Depot Center with, in the first round of the playoffs, where the Galaxy would outwit Chivas 3-2 on aggregate.

2010: Following four straight playoff appearances, Chivas would take a huge step backward, enduring a nine-game winless streak and ending up in last place in the West with an 8-18-4 record. A bright spot for the club was the presence of Jonathan Bornstein on the US National team during the World Cup in South Africa.\

2011: Chivas would suffer through a mediocre first half of the season, alternating ties and losses through a small amount of wins. While they were able to keep a relatively balanced attack on their opponents with a -2 goal differential on the season, the year would be considered a disappointment at 8-14-12, sitting in eighth place in the West.

2012: Owner Jorge Vergara would buy out his partners in midseason and would become Chivas’ only owner, and that would lead to a whirlwind of changes for the club as they muddled through a difficult 7-18-9 campaign. After being in playoff contention for the first half of the season, Chivas would go 0-9-4, including a seven-game losing streak after July 29.

2013: Chivas got off the year to a good start as they won three of their first five matches to contend for the top spot. But it was all very much downhill from there as the club endured a 14-match winless streak that included losing seven in a row to blow any chances they had of contending for the playoffs as the team ended with a 6-20-8 record and in dead last in the West. In the offseason, MLS bought the club.

2014: Hoping to rebound from a last-place finish, Chivas did not fare well out of the gate, winning only two of their first thirteen matches as MLS continued to search for long term owners for the club. Things temporarily seemed to be looking up after a four-game winning streak early in the summer with the help of Mexican Cubo Torres, but a horrific 0-11-1 stretch from mid-July through September spelled doom for the Goats on the way to a seventh-place finish of 9-19-6. Throughout the season, rumors circulated about the future of Chivas, such as shutting the club down altogether while many different prospective owners for the club lined up, which likely resulted in the struggles throughout the year. Attendance was always a concern with the team regularly playing in front of small crowds, including only 3,702 people showing up for a game against Portland the last week of May. The official end came on October 26 against the San Jose Earthquakes, a 1-0 decision with Felix Borja scoring the club’s final goal in front of a home crowd of 5,571. The next day, Major League Soccer took the team off life support and turned the lights out on Chivas USA after ten years, to be replaced by Los Angeles FC in March 2018.


Owner Jorge Vergara is the owner of Mexico's storied soccer club, Chivas de Guadalajara. When he purchased an MLS team, he unveiled the name "Chivas USA" meant to reach out to Los Angeles large Mexican community.

Goalkeeper of the Year: (2) 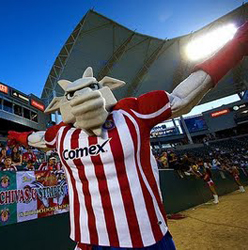 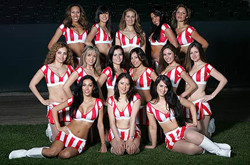 ©MMXV Tank Productions. Stats researched by Stephen Mulvoy, all information, and team names are property of Major League Soccer. This site is not affiliated with the C.D. Chivas USA or the MLS. This site is maintained for research purposes only. All logos used on this page were from Chris Creamer’s Sports Logos Page.
Page created on February 6, 2005. Last updated on May 20, 2015 at 11:35 pm ET.