2018: After three years without a second team in the Los Angeles area, MLS’s 23rd team, Los Angeles FC, made their debut on March 4th on the road against Seattle Sounders FC and came away with a 1-0 win on Diego Rossi’s goal. The club would christen Banc of California Stadium at the end of April against Seattle and sent the sellout crowd home delirious with a sizzling free-kick goal in stoppage time by Laurant Ciman. LAFC would use this start to propel themselves to a dominant first season to end up in third place at 16-9-9, the best regular-season ever by an expansion team. In their Knockout Round match against Real Salt Lake on November 1st, the fans at home watched their team go up 2-1 in the 55th minute and then concede two backbreaking goals to eliminate them, the last of which being an own goal by Walker Zimmerman.

2019: The beginning of LAFC’s second season could not have gotten off to a better start with six wins in their first seven matches, including three shutouts. Carlos Vela continued to be the face of the club with his astounding 34 goals on the campaign with Diego Rossi, a distant second behind him with 16. LAFC would put together an eight-match unbeaten streak, and five-game winning streak in the summer to go with points picked up in their final six games and ended up in first place in MLS with a terrific 21-4-9 record with 72 points, sixteen more than second-place Seattle. The club’s playoff run began with a huge buzz around the city of Los Angeles as they would take on the LA Galaxy. Carlos Vela opened up the scoring with goals in the 16th and 40th minutes before the Galaxy answered with the next two goals to tie the game. But goals two minutes apart by Diego Rossi and Adama Diomande, who later scored again to cancel out a third Galaxy goal, relaxed the home side as LAFC went on to with the game 5-3. In the West Final at home, LAFC got the first strike from Eduard Atuesta, but then watched as the Seattle Sounders scored three times, including twice from Raul Ruidiaz to end their historic season one game short of the final, 3-.1


An expansion team created to form a natural rival for the LA Galaxy in the second largest media market. 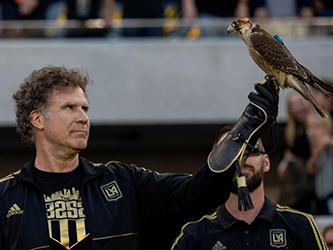 ©MMXX Tank Productions. Stats researched by Stephen Mulvoy, all information, and team names are property of Major League Soccer. This site is not affiliated with the Los Angeles Football Club or the MLS. This site is maintained for research purposes only. All logos used on this page were from Chris Creamer’s Sports Logos Page.
Page created on August 12, 2018. Last updated on July 13, 2020, at 8:35 pm ET.