2017: Professional top tier soccer returned to the Twin Cities for the first time in 33 years on March 3rd as Minnesota United flew out to Portland to face the Timbers. In their first game, the Loons got grounded with a 5-1 pummeling. Christian Ramirez scored the first goal in club history. A week later, the team flew home to TFC Bank Stadium against fellow expansion team Atlanta United and the result was no different as ATL ran away with a 6-1 decision in a snowstorm. A leaky defense was the name of the game for the Loons in their first year, conceding 23 goals in their first eight games and couldn’t right the ship on the offensive side of the pitch either. The inaugural season would conclude with Minnesota in ninth place with a 10-18-6 record and 70 goals allowed.

2018: Attempting to learn from first-year growing pains, the Loons had difficulty taking flight, opening the campaign with a 4-7-0 stretch to mid-May. A three-game win streak in July was of no help to the club as they couldn’t compete with the rest of the West, on their way to a tenth-place finish of 11-20-3. A year after conceding 70 goals, the defense this year did one worse than that with 71 goals given up.

2019: Looking to shore up their defensive struggles, Minnesota United brought in Ike Opara from Sporting Kansas City, and he would do his part to improve the club. A mediocre stretch in March and April kept the Loons in the bottom half of the West, but it wouldn’t be too long before they would kick their game up. A seven-game unbeaten streak from the end of June through the beginning of August brought the club up to playoff conversation, which they would carry into September to secure their first postseason spot at 15-11-8. Their first playoff game proved to be very unproductive as the LA Galaxy scored twice four minutes apart against the Loons’ one in the game’s final minutes.


Former lower division club in the NASL team that was owned by Bill McGuire, former CEO of UnitedHealth Group.

Goaltender of the Year: (1) 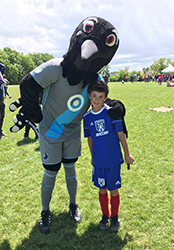 ©MMXX Tank Productions. Stats researched by Stephen Mulvoy, all information, and team names are property of Major League Soccer. This site is not affiliated with the Minnesota United F.C. or the MLS. This site is maintained for research purposes only. All logos used on this page were from Chris Creamer’s Sports Logos Page.
Page created on February 20, 2017. Last updated on July 24, 2020, at 11:35 pm ET.