2012: The Montreal Impact made their MLS debut with a game against their Western Canadian rival, the Vancouver Whitecaps, losing 2-0 on March 10th. They would make their home debut a week later, as a record crowd of 58,912 witnessed the Impact play the Chicago Fire to a 1-1 draw at Olympic Stadium, with Davy Arnaud score the Impact’s first-ever MLS goal. The Impact will play at Olympic Stadium, while their regular field, Saputo Stadium is renovated and expanded for the MLS. They are slated to play their first game at Saputo Stadium in June. They will meanwhile continue to use Olympic Stadium for bigger games in which they expect a larger crowd. At midseason, the Impact acquired 2006 World Cup champion Alesandro Nesta to give a world veteran presence to the club. A five-game winning streak late in the summer helped the Impact to a respectable 12-16-6 record, which put them in seventh place in the East.

2013: Showing improvement from their inaugural year, the Impact won their first four matches to set the tone early and proceeded to win five of their next nine. But after that, the Impact struggled badly, including a six-match winless streak, but the team managed to finish the season with their first playoff berth at 14-13-7. But the team was clearly not ready for primetime as they were blanked by the Houston Dynamo 3-0 in the knockout match.

2014: Team leader Alessandro Nesta announced his retirement in the offseason, and Davy Arnaud was traded, creating a black cloud on the Impact’s season. Indeed, a 0-3-3 start to their year was a precursor to a six-game losing streak during the summer on the way to a 6-18-10 record that left them in the basement of MLS.

2015: Results did not come out of the gate for the Impact, losing three and tying two of their first five matches. A 5-2 stretch followed to put the club back in the mix for a playoff spot, but there was still trouble as a three-game losing streak in August led to Frank Klopas’ ouster. The club brought in Ivorian World Cup veteran Didier Drogba for the playoff push, and he provided in a big way. Under interim coach Mauro Biello, the Impact improved drastically, spurred along by Drogba’s eleven goals in his eleven matches with the team and six wins in their final nine matches to finish in third place at 15-13-6. In the Knockout Round, the Impact easily dispatched Toronto FC 3-0 to move onto the semis. In that round, the Impact beat Columbus Crew SC 2-1 in the first leg but dropped a 2-1 decision in the second leg, and Kei Kamara’s 111th-minute goal sunk the Impact.

2016: Early on, the Impact looked to be the team to beat in the East, coming out with a 4-2-0 run. After a six-match winless streak in the spring, the Impact got to work in getting back up the standings, but inconsistencies in the lineup took a toll on the team and threatened to sink the team. Most notably, Didier Drogba’s tantrum in mid-October over being excluded from a match at Toronto FC was seen as a big splinter in the team’s chemistry. Despite that, they were able to sneak into the playoffs with a fifth-place record of 11-11-12. Perhaps spurred on by Drogba’s exit, the Impact took care of DC United 4-2 behind two goals from Matteo Mancosu. This ride wouldn’t stop there as they eliminated the New York Red Bulls in the second round 3-1 with two goals from Ignacio Piatti. Then came Toronto FC for the right to go to MLS Cup. At home for the first leg, the Impact got off to a flying start with three goals before TFC countered with two away goals. In Toronto, the two clubs went back and forth in the pouring rain, with each having their chance at advancing before heading to extra time with the teams tied at five on aggregate and two away goals. That’s where the line would end for the Impact as TFC scored twice to end their campaign 7-5 on aggregate.

2017: Coming within a whisker of the MLS Cup, the Impact looked to take the next step. But it was not to be as a five-match winless stretch to start the year doomed the club, and they could not gain any traction in the standings. Bad defensive play and lack of goal scoring led the Impact to a ninth-place mark of 11-17-6 as Patrice Bernier announced his retirement at season’s end.

2018: Under new manager Remi Garde, the Impact would have a difficult start to their campaign, opening up the schedule on a 3-10-0 stretch as roster inconsistency in which 16 new players entered the roster at one time or another during the season didn’t help the club much. Even with these issues, Saphir Taïder’s seven goals during the year helped the Impact made a final push for the postseason as they were able to pick up points in August and September to move up the standings. Still, it was not to be as the team wound up in seventh place at 14-16-4, four points in back of Philadelphia for the final playoff spot.

2019: The Impact had a hard time sustaining any momentum to get back to the upper portion of the East as they would alternate wins and losses through the first three months of the season. Then a downward turn would occur in the summer with seven losses and a tie against one win in nine games. Of all players on the team, only Saphir Taïder stood out with ten goals on the campaign and no one to supplement him. Although finishing out of the MLS playoffs in ninth place at 12-17-5, the Impact did secure their fourth Canadian Championship in penalties over Toronto FC.


Name of a lower level team in Montreal that was kept upon getting a MLS team, to hold Montreal's Soccer identity. 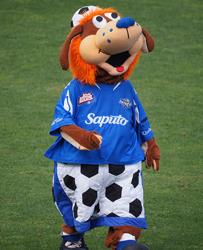 ©MMXX Tank Productions. Stats researched by Stephen Mulvoy, all information, and team names are property of Major League Soccer. This site is not affiliated with the Montreal Impact or the MLS. This site is maintained for research purposes only. All logos used on this page were from Chris Creamer’s Sports Logos Page.
Page created on March 23, 2012. Last updated on August 6, 2020, at 11:55 pm ET.