2005: One of two new teams in MLS, Real Salt Lake playing homage to European Soccer with its name and logo will be begin playing at legendary Rice-Eccles Stadium, home of University of Utah football and the 2002 Winter Olympic Opening Ceremonies. On April 16, in front of a capacity crowd at Rice-Eccles Stadium, Real Salt Lake played their inaugural home game against rival Colorado Rapids. The game would be held scoreless until Brian Dunseth sent fans wild with a goal in the 81st minute to beat their rivals in their first home game. That would be the lone bright spot for RSL as the rest of the season was filled with losses and some ties, including a 10 game losing streak through the summer. RSL, with a record of 5-22-5, finished in fifth place in the West in front of expansion counterparts Chivas USA. The talent on the team is deep with Clint Mathis, Eddie Pope, Jason Kreis, Andy Williams and Scott Garlick.

2006: A cloud of uncertainty hung over real Salt Lake in their second year. In July, the State of Utah and the club were at a standstill as to whether or not a new stadium should be built. An agreement was eventually reached, and helped secure the team’s future in the state. Despite the distractions, Real Salt Lake played well, even finding themselves in position to make the playoffs in September. But it was not to be, finishing with a record of 10-13-9, missing the postseason by two points.

2007: With the knowledge that he was eligible to be transferred after turning 18, RSL acquired Freddy Adu and then allowed him to go overseas and play for SL Benfica in Portugal. This brought transfer money to the club and they used in to invest in young developing talent. Also, Jason Kreis was brought in as coach mid-season to help turn the team around. The results would not come immediately and RSL limped to a record of 6-15-9 and again sat in last place in the West.

2008: After failing to qualify for the playoffs in each of their first three seasons, Real Salt Lake finally broke through on a dramatic goal by forward Yura Movsisyan, who scored an equalizing goal against the rival Colorado Rapids in the final game of the season with the postseason on the line. Late in the season Real Salt Lake took a step toward the future as Rio Tinto Stadium opened with a 1-1 tie against Red Bull New York. At 10-10-10 third place Real Salt Lake faced Chivas USA in the playoffs winning the first game of an aggregate score two game series 1-0. In Game 2 they would forge a 2-2 tie to advance to the semifinals with a 3-2 total score. However, down 1-0 several shots went were turned away as Real Salt Lake was knocked out by Red Bull New York with a trip to the MLS Cup on the line.

2009: In their first full season at Rio Tinto Stadium, RSL would continue their inconsistent ways, winning only three of their first thirteen games and winning consecutively only once the whole season. But they did have an outstanding home record, losing only once in their new place and using that to edge out Colorado on a tiebreaker for the last playoff spot at 11-12-7. In the first round, Salt Lake would surprise by defeating defending champion and Supporter’s Shield winner Columbus Crew 4-2 on aggregate. Against the Chicago Fire in the conference final, the two teams would play a scoreless regulation and overtime and would head to a penalty shootout. There, Ned Grabavoy converted a sudden death kick to propel RSL, the team with the worst playoff record, to their first MLS Cup.

2009 MLS Cup: Heavy underdogs against the LA Galaxy in Seattle, Real Salt Lake lived in the moment and wanted to prove they were better than their regular season record indicated. In the early portions of the match, the Galaxy controlled the run of play and it paid off when Mike McGee cored in the 41st minute. Refusing to go away, RSL pressed forward and the equalizer came in the 64th minute via a Robbie Findlay rebound goal. Both teams kept each other off the scoreboard and the match would head to a penalty shootout. With the teams tied at 4 in the sudden death portion, a miss by Edson Buddle opened the door for Robbie Russell to make his kick and Salt Lake had earned themselves an improbable first championship. For his work in the shootout, keeper Nick Rimando was named MVP.

2010: Coming off their first championship, expectations were high in Utah for Real Salt Lake and the team did not disappoint. Despite a sluggish start to the season, RSL embarked on a five-game winning streak and stayed in second or third place in the overall table all season. After alternating wins and ties throughout the last three months, Salt Lake sat in second place with a solid 15-4-11 record. But their bid for a repeat fell short in the first round, losing to FC Dallas on aggregate 3-2.

2011: RSL would start the season clicking on all cylinders, winning their first four games while posting three shutouts. Following this, Salt Lake would go through a series of tie games through the summer that would knock them from first place in the West. During August and mid-September, RSL went on a five game winning streak before a four game losing streak in late-September and October to finish in third place with a 15-11-8 record. In the first playoff leg, RSL scored three goals in the first game before conceding two and holding off the Seattle Sounders 3-2 in the series. Then in the conference final, Salt Lake hit a wall, losing to the LA Galaxy 3-1.

2012: After advancing to the West Final, RSL started out the season on a tear, winning five of their first six matches with Alvaro Saborio leading the way. The team wouldn’t be able to keep up its torrid pace as they slid a little bit in the back half of the year but still finished in second with a 17-11-6 record. But the Seattle Sounders would put an end to their season with the only goal of the series coming from Mario Roberto Martinez with ten minutes to go in the second leg.

2013: Before the start of the season, RSL would undergo an ownership change as Dave Checketts sold the club to Dell Loy Hansen on January 24. As the season got underway, the team had to release some key players to get under the salary cap and there was some skepticism. The team started out the season at an uneven pace having a hard time finding traction. A 7-2-1 run near the end of spring helped the team make up some ground and contend for the West title. The Portland Timbers would beat out RSL by one point for the top seed, but the team did get second place with a respectable 16-10-8 record. In the first round, RSL ended the two year reign of the LA Galaxy as they came back to beat the champs 2-1 on aggregate. And in the conference final, Salt Lake made easy work of the Portland Timbers 5-2 to advance to Kansas City and MLS Cup.

2013 MLS Cup: In their second championship game in five years, RSL were the visitors against Sporting Kansas City in Sporting Park. In the coldest MLS Cup in history, neither RSL nor SKC were able to dent the scoreboard in the first half. But in the 52nd minute, Alvaro Saborio took a shot that went in and Salt Lake took the lead. The visitors kept pressing and nearly went up two when a shot by Javier Morales hit the post. The home side shrugged this off and evened up the score in the 76th minute on a corner kick that was headed in by Aurelien Collin. The teams went to overtime at 1-1 and Saborio scored in the first extra time period, but the goal was nullified for offside. Things looked hopeless for RSL in the penalty shootout as they missed their first two and Kansas City made their first two. Graham Zusi missed a potential winning kick and Morales forced sudden death with his conversion. In the eighth round, SKC’s Lawrence Olum missed and Sebastian Velasquez had a chance to win the game, but Jimmy Neilsen saved his kick. The game finally ended in disappointment for Salt Lake in the tenth round as Collin’s penalty kick was made and Lovel Palmer’s was saved by Neilsen.

2014: Fresh off a narrow MLS Cup loss, RSL brought up Jeff Cassar as their new coach as Jason Kreis left to assemble eventual expansion side New York City FC. Cassar would see Salt Lake go unbeaten in their first 12 matches and seemed poised to make another Cup run. Despite slowing down somewhat, the club ended the year in third place with a 15-8-11 record. After a scoreless first match to the LA Galaxy, RSL’s playoff run finished horribly with a 5-0 pounding in the second game in LA brought on by Landon Donovan’s hat trick.

2015: It would be a tough transition year for RSL as they opened the season with just two wins in their first nine matches. Coach Jeff Cassar’s switch of the club’s attacking system was doomed for failure as injuries conspired to spiral Salt Lake to a ninth place finish of 11-15-8.

2016: Looking to rebound and return to the playoffs, RSL got of to a very respectable start, winning five of their first seven games and battling FC Dallas and Colorado for the top spot in the West. Through the spring and summer, the team kept up the pace but stumbled terribly throughout September and October, losing four and tying three. Despite that, they hung onto the last playoff spot at 12-12-10. The season would come to a crashing halt in the Knockout Round, losing 3-1 to the LA Galaxy.

2017: It would be a tough beginning to the season for RSL as they would only score once in their first four games and could only pick up two points in the standings in that stretch. The slump would continue all throughout the spring as the club could not put the ball in the back of the net with three players scoring seven goals for the year. A 5-1-3 span through the summer was too little too late to save Salt Lake as they would up in eighth place at 13-15-6, one point out of tying for a playoff spot. 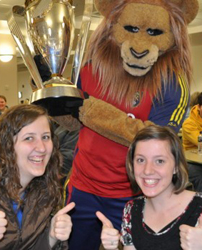 ©MMXVIII Tank Productions. Stats researched by Stephen Mulvoy, all information, and team names are property of Major League Soccer. This site is not affiliated with the Real Salt Lake or the MLS. This site is maintained for research purposes only. All logos used on this page were from Chris Creamer’s Sports Logos Page.
Page created on February 6, 2005. Last updated on August 10, 2018 at 11:00 pm ET.