2007: Despite a long scoreless streak to start the team’s history, Toronto FC quickly began to establish itself as a solid soccer club and organization with beyond powerful fan support. As proof of this, the club’s first win on May 12 at BMO Field saw Danny Dichio score in the 24th minute, sending the sellout crowd – the first of many – into ecstasy, tossing plastic soccer shaped seat cushions onto the field in celebration. The 3-1 win over Chicago was preceded by a 1-0 win over the eventual champions Houston Dynamo. Though TFC would slip to the cellar of MLS with an expansion-like record of 6-17-7, the club built a solid foundation as the first Canadian team in MLS and looked toward a bright future.

2008: In their second season, Toronto FC looked to moving a step forward as they hosted the MLS All-Star Game. However, the steps Toronto FC took were more like baby steps as they again were stuck in last place in the Eastern Conference as they posted a record of 9-13-8. However, the stands at BMO Field were packed on a regular basis as Toronto FC continued to enjoy an enthusiastic fan base.

2009: Hoping to take the next step up, Toronto had a difficult time, winning only once in their first five games and only winning consecutive games twice. Their inability to string winning streaks was their undoing as they finished out of the playoffs again at 10-11-9, missing out on the last day.

2010: Toronto FC would again have difficulty getting out of the gate, losing four of their first six games, and could not keep pace with the rest of the league. At seasons end, the Reds watched the playoffs from home for the fourth straight year at 9-13-8.

2011: Continuing to attempt to get into the playoffs, Toronto FC continued to struggle, winning only two of their first twenty games as they could not get anything going in the season. A four-game losing streak in July ensured the club a spot at home during the playoffs yet again with a record of 6-13-15, next to last in the East.

2012: Once again, Toronto struggled badly throughout the season, including losing their first nine to start the year on the way to an awful 5-21-8 record. What must have made the season more disappointing for TFC was the fact that Vancouver Whitecaps became the first Canadian playoff team, six years after Toronto’s inaugural season.

2013: Toronto FC would once again struggle badly out of the gate, winning one of their first twelve matches and two oft heir first twenty to finish in ninth place in the East at 6-17-11.

2014: In an attempt to get over the hump, Toronto FC acquired big names such as Jermain Defoe, Michael Bradley, and Gilberto. Wins in their first two games gave some hope to fans, but inconsistent play would doom the club yet again as they ended the year in seventh place at 11-15-8.

2015: Bringing in Sebastian Giovinco and Jozy Altidore would prove to be vital for TFC, finally making their first playoff appearance. Giovinco exploded for 22 goals, but the club’s defense had trouble keeping results in their favor. It wound up not mattering as the Reds finished sixth in the East at 15-15-4 and an even goal differential of 58. The Montreal Impact brought a quick and painful ending to their season in the Knockout Round with a 3-0 result.

2016: Looking to build on their first playoff appearance, the start of the season was nothing to write home about, going 3-2-2 and struggling to pull their heads over opponents. Then during the summer, Sebastian Giovinco raised his game and helped the Reds to a 6-01 stretch and three successive ties in September to finish in third place in the East at 14-9-11. In the Knockout Round match against Philadephia, Giovinco, Jozy Altidore, and Jonathan Osario scored to move the team on. The conference semifinals would be no problem at all for TFC as they shutout New York City FC 7-0. Against Montreal in the East Final, Toronto would be in big trouble early on, spotting the Impact a 3-0 lead in the second half. Then Jozy Altidore and Michael Bradley provided two big away goals to make their deficit 3-2 going into the last leg at home. In that game in the pouring rain, the two teams went back and forth, trading the lead and heading to extra time in the series with each team knotted at five goals, each with two away goals. In extra-time, Benoit Cheyru and Tosiant Rickets score to propel TFC to their first Eastern Conference Championship.

2016 MLS Cup: Having steamrolled into their first MLS Cup at home, Toronto FC was confident going up against fellow newcomers to this game, Seattle Sounders FC. In freezing conditions, the Reds controlled the tempo of the game but were unable to come up with anything and held the Sounders off the board to go to extra time scoreless. In that session, TFC came close to going ahead on a header by Jozy Altidore, but Stefan Frei made a Superman stretch to make the save. In the penalty shootout, the teams went to sudden death tied at four when Justin Morrow’s shot nailed the crossbar, and Roman Torres made his, giving Seattle the championship and Toronto a bitter end to a terrific season.

2017: Coming out of the gate with a 1-1-4 stretch had some TFC supporters worried that there might have been a hangover from the loss in MLS Cup. It turns out the team was just getting started as they would only lose one game from April 21-June 23 winning nine times in that stretch, and by mid-August, Toronto was way ahead of everyone in the Supporter’s Shield race. At season’s end, TFC easily claimed the Shield with a record of 20-5-9 and 69 points, which were the most in the history of MLS. Helping along the way were 20 goals by Sebastian Giovinco and 18 by Jozy Altidore, which contributed to a goal total of 74 for the season, the second-highest ever, and a +37 difference. In addition, their Canadian Cup Championship gave them two significant pieces of hardware. The first opponents in the playoffs would be the New York Red Bulls, and in the first game, TFC scored two key away goals to help knock off the Red Bulls 2-2 on aggregate. They would have to play their next match against Columbus Crew SC without Jozy Altidore as he would get suspended for a halftime fight with Sasha Kljestian. Altidore would make his return in the second leg of the East Finals and score a 60th minute goal to win the series and send TFC to MLS Cup for the second year in a row.

2017 MLS Cup: With a win, Toronto FC would cap off the most successful team in MLS history with the first-ever domestic treble. Standing in the way of this were the Seattle Sounders, the team that beat them in MLS Cup the year before. In far warmer conditions than the last time, TFC came out flying and peppered Stefan Frei with six shots on net in the first half, all of which he saved and lived in the Seattle defensive end. This continued into the second half, and the home side was finally rewarded with a goal off a counterattack in the 67th minute by Jozy Altidore. The Sounders were unable to equalize, and Victor Vazquez scored off a rebound in the 94th minute to complete the team’s treble with the MLS Championship. Altidore’s ice-breaking goal earned him the MVP hardware.

2018: With three trophies from the previous year in their case, TFC looked to keep up their steady pace at the top of MLS. But an apparent hangover from two record-breaking seasons made its way to the team as they were only able to win two of their first nine matches to go with six losses. The departure of Steven Beitashour to Los Angeles FC contributed to damage TFC’s chemistry to go with a lack of depth on the roster. A mediocre summer prevented the club from making any move up the standings as they wound up in ninth place in the East at 10-18-6.

2019: Hoping to get back into the East’s playoff picture, TFC got off to a good start, winning their first three games and then having consistent play before a slippery stretch in May and June with three ties and five losses. The wobbly play would last until August 10, after which they would not lose another game, trading wins and ties until the end of the regular season with TFC in fourth place in the East at 13-10-11. Alejandro Pozuelo’s 12 goals and Jozy Altidore’s 11 goals were the driving force behind their playoff run this year. At home against DC United in their first playoff game, the Reds got the first goal from Marky Delgado and held on for the rest of regulation. But Lucas Rodriguez would temporarily put a hold on the advancement party with a penalty kick goal in second-half stoppage time. In extra time, TFC would run riot, scoring four times to move onto the next round. In Queens, New York, against top-seeded New York City FC, the visitors drew first blood with Pozuelo’s 47th-minute goal, only to be canceled out in the 69th minute by Ismael Tajouri-Shadi. But Toronto would win the game when Pozuelo scored a penalty kick in stoppage time and move onto the East Final against Atlanta United FC. In that game in the Deep South, United took an early lead with Julian Gressel’s goal. But resilient TFC roared back again as a tying goal came minutes later from Nicolas Benezet, and Nick DeLeon scored the winning goal with 12 minutes remaining to send Toronto FC to MLS Cup for the second time in four years.

2019 MLS Cup: In the third act of the Seattle-Toronto MLS Cup trilogy, TFC’s attempt to get back to the top of the MLS pedestal would have to come in the riotous atmosphere of CenturyLink Field in the Pacific Northwest of the US. The red team controlled the play for much of the first half, and the green team spent that time defending and counterattacking, and neither side could break the deadlock before halftime. In the 57th minute, the Sounders Kelvin Leerdam took a shot that deflected off Justin Morrow and into the net for the first goal of the game. Energized, the home team added insurance in the 76th minute on a goal from substitute Victor Rodriguez. A clinching goal from Raul Ruidiaz was the nail in the coffin for TFC as Altidore’s consolation goal in stoppage time made no difference as the team dejectedly walked off the pitch to blue and green confetti swirling around them.


The "F.C." in the team's name is the conventional initials for Football Club, in the tradition of European clubs. 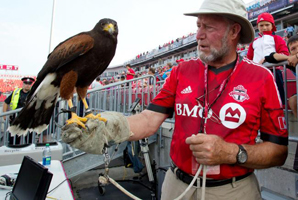 ©MMXX Tank Productions. Stats researched by Stephen Mulvoy, all information, and team names are property of Major League Soccer. This site is not affiliated with the Toronto F.C. or the MLS. This site is maintained for research purposes only. All logos used on this page were from Chris Creamer’s Sports Logos Page.
Page created on March 11, 2007. Last updated on July 12, 2020, at 11:30 pm ET.