2011: On March 19, the Vancouver Whitecaps FC, a reincarnated team from the NASL and lower divisions in North American Soccer, played their inaugural match at Empire Field against Toronto FC, which also happened to be the first-ever MLS game between two Canadian clubs. In this match, the Whitecaps would beat Toronto 4-2. But that would be the only win they would record until mid-June, and the team would badly struggle as they sat in last place for virtually the entire season and ended with a 6-10-18 record. In October, the club left Empire Field for BC Place. The stadium renovated after the 2010 Winter Olympics for them and the British Columbia Lions.

2012: After a decent 5-2-2 start to their second season, the Whitecaps would have difficulty for most of the rest of the season with injuries and roster turnover. At the end of the year, the club won only one of its last nine matches to finish at 11-13-10, but it was good enough to clinch a spot in the West’s knockout game. In that game against the Galaxy in LA, Darren Mattocks scored for the Whitecaps in the 3rd minute, and the score stood that way for a while as fans thought of a huge upset. But Mike Magee and Landon Donovan scored midway through the second half to snatch the victory away from the Whitecaps.

2013: After making the playoffs for the first time, the Whitecaps would find it difficult to stay in contention. Although they won their first two games to start the season, the Caps alternated wins, losses, and ties for much of the rest of the season, a trend that helped them to finish in seventh place at 13-12-9, three points out of a playoff spot.

2014: After missing the playoffs, the Whitecaps attempted to take another step forward under new coach Carl Robinson. The team’s defense proved to be stingy as they recorded 13 shutouts, and Pedro Morales led the club with nine goals. In the summer, star Camilo Sanvezzo would be transferred to Mexico, and it threatened to derail the Whitecaps’ season. But they were able to balance wins and ties to a fifth-place finish of 12-8-14. Against FC Dallas, Vancouver’s season would come to an end 2-1, courtesy of Michel Garbini Pereira’s late penalty kick.

2015: The Whitecaps used a four-game winning streak at the start of the season to show they were a legitimate Western Conference threat. An inconsistent summer brought about by injuries weakened their position, and they were tied with Portland at 16-13-5, but they were able to hold them off on goal differential and earned second place as a result. The Timbers would get the last laugh, beating them in the semifinals 2-0 on aggregate.

2016: After losing their first two matches of the campaign, the Whitecaps didn’t have much else going right for them as an inconsistent season, compounded by a four-match losing streak in July and August, conspired to bring the team to eighth place at 10-15-9.

2017: The season got off to a tepid start for the Whitecaps, winning only one of their first five and had trouble picking up the pace with the other teams in the West. Kendall Waston, who did an excellent job doing his part to keep opponents off the board, led the team’s defense, and Freddy Montero’s 14 goals led the team. The Whitecaps would use a seven-game unbeaten streak in last summer to help them to a third-place record of 15-12-7 and one point behind both Portland and Seattle. There was nothing that could stop the team in their Knockout Round clash with the San Jose Earthquakes, sending them flying out of Canada with a decisive 5-0 win. But that seemed to drain the Caps as they were shutout in the next round 2-0 on aggregate to the Seattle Sounders on two goals by Clint Dempsey.

2018: With high expectations, the Whitecaps had a tough time starting, winning only four of their first ten matches. Four draws in a row did no good to the club as their mediocrity through the summer sunk them, which led to Carl Robinson’s dismissal as manager with five games remaining to end up in eighth place in the West at 13-13-8, basically wasting 14 goals from Kei Kamara and eight goals from Alphonso Davies.

2019: Any chances the Whitecaps may have had in improving were dashed immediately as a six-game winless streak to open the season, including three straight losses out of the gate, doomed the club. The club was able to string together an unbeaten run of six games in late spring, but a five-game losing streak in the summer was the nail for the Whitecaps as they wound up dead last in the West at 8-16-10.


Whitecap' refers to a snowy tops that you see on Vancouver's surrounding mountains and ocean waves of the Pacific. 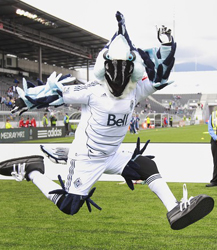 ©MMXX Tank Productions. Stats researched by Stephen Mulvoy, all information, and team names are property of Major League Soccer. This site is not affiliated with the Vancouver Whitecaps F.C. or the MLS. This site is maintained for research purposes only. All logos used on this page were from Chris Creamer’s Sports Logos Page.
Page created on March 22, 2012. Last updated on August 8, 2020, at 11:55 pm ET.