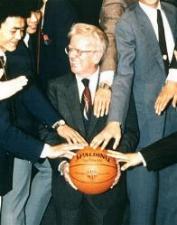 Profile: Born in Springfield, Massachusetts the birthplace of basketball Lawrence O’Brien grew up around the game of basketball. However sports would not become his job until late in life. Lawrence O’Brien’s first love was politics where he was a brilliant political strategist, helping to get long time friend John F. Kennedy elected to the Senate, and later the Presidency.

During the Kennedy Administration O’Brien was a special assistant to the President, serving as Kennedy’s liaison to congress. In 1965 O’Brien was selected by Lyndon Baines Johnson to be Postmaster General a post he held until 1968.

In 1968 O’Brien would become Chairman of the Democratic National Committee, serving through two presidential elections, including the 1972 campaign, when burglars broke into his office at the Watergate Hotel in order to wiretap his conversations. This event became the largest political scandal in US history and, eventually led to the resignation of President Richard Nixon.

In 1975 Larry O’Brien made the transition from politics to sports becoming commissioner of the National Basketball Association. Beginning his first year under a cloud of doubt that such a transition wasn’t possible, O’Brien put his critics to rest by compiling an impressive résumé of accomplishments. The list includes the merger of the ABA with the NBA, negotiating and signing a lucrative television contract with CBS, and negotiating a historic collective bargaining agreement with the NBA Players Association. As a result of these milestone accomplishments, O’Brien was named The Sporting News “Sportsman of the Year” in 1976

With an immense drive and dedication, Larry O’Brien continued to make strategic decisions that improved the NBA throughout his nine year tenure. In 1980, the NBA scholarship program was established, and in 1983, an innovative anti-drug program was adopted, which was needed to as the league had a perception that drug use was rampant..

He even improved the quality of the game decreasing on court violence and hand checking, while instituting the three point line. In his final years at helm O’Brien would negotiated another historic CBA with the NBAPA, getting the league to establish a salary cap, which helped curtail rising salaries in 1983, a move that saved the league from bankruptcy as 17 teams were in the red at the time.

O’Brien also negotiated contracts with ESPN and USA Network to get the NBA on cable TV a first for a professional sports league in 1982, which helped the league get greater exposure.

O’Brien stepped down as commissioner in 1984, leaving the league in its best shape ever; gate receipts doubled, television revenue tripled, and the image and awareness of the league had reached new heights, and was on the verge of a popularity explosion.

In honor of Lawrence O’Brien’s service to the league, the NBA named its championship trophy after him. O’Brien continued his contributions to the game as he served as president of the Basketball Hall of Fame from 1985 to 1987, and was instrumental in making the annual NBA/Hall of Fame Day in Springfield an eagerly awaited event.

©MMVIII Tank Productions. This site is not affiliated with the National Basketball Association. This site is maintained for research purposes only. Page created on February 21, 2004. Last updated on January 23, 2008 at 11:45 pm ET.