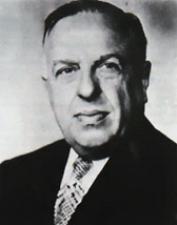 Profile: Maurice Podoloff was born in Elizabethgrad, Russia on August 18, 1890. When he was a young boy his family immigrated to the United States, where he graduated Hillhouse High School in New Haven, Connecticut in 1909. From there Podoloff went on to Yale where he got his law degree in 1915.

A distinguished lawyer Maurice Podoloff, was a man of impeccable character, and was instrumental in the development and success of Professional Basketball. On June 6, 1946, Podoloff, who was already serving as president of the American Hockey League, was appointed president of the newly formed Basketball Association of America, becoming the first person to simultaneously lead two professional leagues.

After the BAA signed several of the top names in the National Basketball League into the league, Maurice Podoloff negotiated a merger between the two groups to form the NBA in 1949. As a lawyer with no previous experience, Podoloff’s great organizational and administrative skills were later regarded as the key factor that kept the league alive in its often stormy, formidable years.

He was a president who was fair to all teams and owners, regardless of their power. In 17 years as president, Podoloff expanded the NBA to as many as 17 teams, and briefly formed three divisions and scheduled 557 games.

During his tenure Maurice introduced the collegiate draft in 1947, and in 1954 instituted the 24 second clock created by Dan Biasone, Owner of the Syracuse Nationals which quickened of games, and took the NBA from a slow plotting game to a fast paced sport. In 1954, Podoloff also increased national recognition of the game immensely by securing its first television contract.

Maurice Podoloff would step down as NBA president in 1963. However, during the formative years of the NBA he was able to increase fan interest and improved the overall welfare of the sport of basketball through his foresight, wisdom and leadership. In his honor, the NBA would name its annual league MVP trophy the Podoloff Cup.

©MMVIII Tank Productions. This site is not affiliated with the National Basketball Association. This site is maintained for research purposes only. Page created on February 21, 2004. Last updated on January 23, 2008 at 11:45 pm ET.