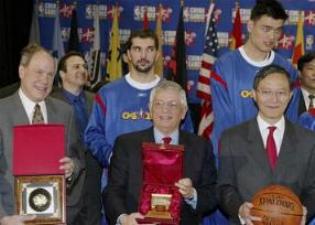 Profile: David Stern was born September 22, 1942, and raised in Chelsea, New York. His career began in his family’s New York delicatessen, Stern’s Deli. Working behind the counter gave Stern the kind of work ethic necessary to head a multimillion-dollar empire.

The only role basketball had in Stern’s early life was shooting hoops at a local basketball court, as well as his love for the New York Knicks. Interested in politics, Stern studied political science and history at Rutgers, aiming for a career in public service. After receiving his B.A. in 1963, Stern went on to study law at Columbia Law School, all the while serving deli customers, graduating in 1966.

Fresh out of law school, David Stern worked at the New York firm Proksauer Rose, where he served as outside counsel to the NBA. He left the firm in 1978 to join the NBA as general counsel, and was named the league’s executive vice president in 1980.

Rising through the ranks, Stern was unanimously elected as the fourth commissioner and began his term on February 1, 1984. At the start of Stern’s tenure, the league was close to bankruptcy. Not only was the NBA losing its fans, it was also tainted by management-labor wars, drug use, and overall conflict.

To say that Stern turned the NBA around would be an understatement. Since 1984, the NBA’s revenue has increased by 500%, quite a difference from the time when at least 17 teams were suffering from financial losses. Drug use in the NBA was rampant? No problem, David’s stern approach toward drugs helped rid the NBA of that problem by offering treatment to players who came forward with their addiction (without penalty), and zero tolerance toward those who didn’t fess up. Stern’s work with the NBA, before becoming commissioner led to the emergence of the salary cap, which helped stabilize teams that were losing money by keeping salaries under control.

The NBA became more unified, and fans started watching games thanks to stars like Larry Bird, Magic Johnson, and some Chicago Bulls player, Michael Jordan. In the 1990’s, ratings for NBC’s NBA games draw in large audiences, a far cry from the days when the 1980 NBA Finals aired at 11:30pm on tape delay. Savvy at marketing the game David Stern also created NBA Entertainment a production company in charge of producing various tapes and entertainment programs aimed at promoting the league around the world.

David Stern is considered one of the best commissioners in the history of sports; Stern’s major accomplishments include: the addition of seven new franchises; the opening of international offices in Barcelona, Hong Kong, London, Melbourne, Mexico City, Miami, Paris, Singapore, Taiwan, Tokyo, and Toronto; and the creation of the WNBA the Women’s National Basketball Association in 1997, which is recognized as one of the most successful launches in sports league history.

David Stern was also at the forefront of creating the Dream Team in 1992, as the NBA sent its best players to the Olympics in Barcelona, Spain to compete for Team USA. At the same time the NBA began playing annual preseason games in Europe and was the first American Sport to play regular season games in Japan. The exposure of the league around the world has led to an international explosion in popularity of the league, which has led to talent from all corners of the world playing in the NBA, and becoming All-Stars. This global outreach continues to be a priority for Stern, as the NBA plays preseason games in Europe and Asia every summer.

In recent years Stern oversaw the creation of the National Basketball Development League; the 1999 launch of NBA TV, a 24-hour digital network; and the NBA and WNBA websites, that average nearly 600,000 visitors a day. NBA-TV was the first Television network, owned and operated by a sports league, within a few years the NFL and NHL would launch similar networks.

David Stern has also been committed to numerous public service causes that NBA players participate in, such as literacy, child abuse prevention, hunger relief, and the Special Olympics, and he organized the NBA’s TeamUp program, which promotes community service.

As David Stern enters nearly 25 years in office, he is highly regarded as the best commissioner in the history of the league, yet he still has to battle problems, such as the player’s behavior on and off the court. Both of which he has addressed with a stern hand, suspending players simply for leaving the bench during a scuffle even in the playoffs, enforcing a strict dress code, and suspending players for off-the-court conduct.

David Stern would announce his retirement in 2012, with the caveat he hold his post until 2014, stepping down after reaching 30 years in his post, the second longest tenure of any commissioner among the four major sports in North America.

As David Stern approached his 30th season as commissioner the league again had a drawn out labor battle, that led to a lockout which would delay the start of the 2011/12 season for two months. The battle was over dividing revenue among players and owners, as during the recession teams began losing money and could no longer afford some of the big contracts they were handing out. After the lockout was settled, Stern created more controversy as he voided a deal that would have sent Chris Paul from the league run New Orleans Hornets.

David Stern would hand over the reins to his deputy Adam Silver on February 1, 2014 exactly 30 years to the date he became commissioner of the NBA.

©MMXV Tank Productions. This site is not affiliated with the National Basketball Association. This site is maintained for research purposes only. Page created on February 21, 2004. Last updated on January 8, 20135 at 12:25 am ET.