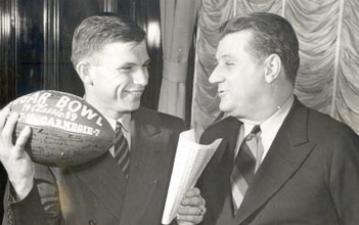 Profile: Bert Bell was born de Benneville Bell, to a prominent Main Line family of significant wealth and influence on February 25, 1895. For most of his life, Bell was involved with football; the sport was in his blood. He was, indeed, a football man from wire to wire. As a schoolboy, he went from Episcopal Academy to the Delancey School, to Haverford School where he captained the football, basketball and baseball teams as a senior.

There was never much question where Bell was going to attend college. “Bert will go to Penn or he’ll go to hell,” his father was fond of saying. Fulfilling his somewhat predetermined fate, Bell enrolled at Penn 1914. After a year of freshman ball and another on the “scrub” team, he became the Quakers’ varsity quarterback. Bell was a real firebrand and besides quarterbacking he punted, returned punts, kicked field goals, and played defense. In 1916, the cocky quarterback led Penn to the Rose Bowl.

In 1918, Bell served in France with the 20th General Field Hospital, a mobile unit that had been formed at Penn. He was cited by the United States and France for bravery at the mobile unit which, at times, was under constant shelling by the Germans.

After the war, Bell returned home to captain the Quakers for one final season in 1919, and then remained at Penn as an assistant coach under John Heisman and Louis Young for nine years. He was credited with developing the famous “hidden ball” play. Bell shifted to Temple as an assistant coach for two seasons.

In 1933 Bert Bell and three former Penn teammates bought the Frankford Yellowjackets of the NFL. Pro football was far from big-time in 1933, however, Philadelphia sounded more big-time than Frankford, so Bell moved the Yellowjackets to Philly and renamed them the Eagles in honor of the symbol of Franklin Roosevelt’s National Recovery Act. Bell became the coach, business manager, publicist, ticket seller, while single-handedly kept the Eagles afloat until 1940, when he joined Art Rooney as part owner of the Steelers. In 1946 Bell sold his interest in the Steelers when he was named commissioner of the NFL. Early in his ownership efforts he became an influential owner, establishing the Draft system for first year players in 1935.

As Commissioner, he resided over the absorption of three All-American Conference Clubs into a realigned NFL in 1950. Demonstrating vision and integrity, Bell implemented home-game blackouts when television began to become a factor in the 1950s. This allowed NFL teams to sellout the stadiums without worrying people would want to stay home and watch the game on TV. He had been hired by the owners but he stood up for the players, recognizing the formation of the NFL Players Association when the owners refused. Bell would constantly help players in landing loans, and off-season jobs, while giving each player his home phone number telling them to call at any time.

“He had become a benevolent dictator, a man so powerful that the magnates didn’t dare oust him because he had become, too, a shining symbol of pro football’s integrity,” wrote Arthur Daly in The New York Times in 1968. “Besides, they had developed so intense an admiration for the man and what he had accomplished that they wanted him to keep running their show, a job he was handling with consummate skill.”

Bert Bell, who coined the statement “On any given Sunday, any team can beat any other team,” was keen on selling the game, trying to get the sport on TV as much as possible, while selling its players to commercials and billboard advertisements. Bell stood over the NFL as the sport was beginning to make in roads into America’s conciseness. One big moment came during the 1958 NFL Championship game when the Baltimore Colts beat the Giants in New York in the first overtime game in NFL history. A game that was also the first telecast nationally. Following the game Bell stood back and watched the celebration knowing the sport had arrived.

One of his peculiarities as commissioner was that, despite the fact that he was entitled to his own box and free tickets, he always paid for his tickets and sometimes liked to wander through the stadium, cavorting with his pals, “the working stiffs,” as he called them, in the cheap seats.

That’s one reason Bert Bell probably happened to be in the end zone stands at Franklin Field in Philadelphia when he died. It happened with two minutes left in a Steelers-Eagles game on October 11, 1959. Bell, the 64-year-old Commissioner of the National Football League, suffered a fatal heart attack, proving once again that irony and destiny are not always strange bedfellows.