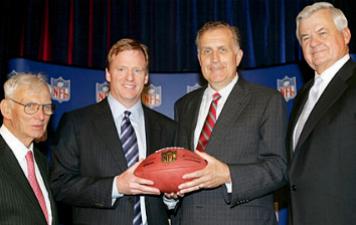 Profile: Roger Goodell was born on February 19, 1959 in Jamestown the son of a Republican Representative and later Senator from New York, Charles E. Goodell. The Goodell family moved to Bronxville, New York, in 1971, after Charles E. Goodell lost a re-election campaign. There Roger graduated from high school as a three-sport star for Bronxville High School in football, basketball, and baseball, Goodell captained all three teams as a senior and was named the athlete of the year at Bronxville High.
Roger Goodell would go on to Washington & Jefferson College in Washington, Pennsylvania, where he graduated in 1981 with a degree in economics.

In 1987, Goodell was appointed assistant to the president of the American Football Conference (Lamar Hunt), and under the tutelage of Commissioner Paul Tagliabue filled a variety of football and business operations roles, culminating with his appointment as the NFL’s Executive Vice President and Chief Operating Officer in December 2001.

As the NFL’s COO, Goodell took responsibility for the league’s football operations and officiating, as well as supervised league business functions. He headed NFL Ventures, which oversees the league’s business units, including media properties, marketing and sales, stadium development and strategic planning. Goodell was heavily involved in the negotiation of the league’s current collective bargaining agreement. He had worked extensively with Tagliabue since the latter became commissioner in 1989. He has played an extensive role in league expansion, realignment, and stadium development, including the launch of the NFL Network and securing new television agreements as well as the latest collective bargaining agreement with the NFL Players Association.

With such a heavy role already in the league Roger Goodell seemed a natural choice to relieve Tagliabue who retired in 2006. While the league was bigger and better then ever, Goodell still had to deal with several off-field concerns in his first year as commissioner.

As the epidemic of players being arrested, began to reflect badly on the NFL. To send a strong message Goodell would begin stepping up punishment for players involved in legal incidents including Pacman Jones of the Tennessee Titans, who was suspended the entire 2007 season after a series of arrests culminating with a Las Vegas Nightclub shooting that left a man paralyzed. In addition he suspended Chris Henry of the Cincinnati Bengals, and Tank Johnson of the Chicago Bears eight games after they received convictions, while acting fast to not allow Michael Vick to join the Atlanta Falcons after he was indicted on dog fighting charges.

Another issue plaguing Goodell’s early tenure is the health of former NFL players, as the league pension and disability policies have come under fire from former players including Hall of Famer Mike Dikta. Goodell nor the NFL Players’ Association has yet to really take on the issue, that is seeming like a coming storm on the horizon for the league that is highly image concessions.
Growing the game globally was also big on Roger Goodell’s agenda, as the league began playing regular season games in London, starting with the Miami Dolphins facing the New York Giants in 2007. However, despite this the league still chose to cease operations on the faltering NFL Europe that same year.

In 2011, Roger Goodell faced the league’s first labor crisis in two decades as the entire off-season program was disrupted by a lockout. Hurting the league’s credibility with the players was the view that Goodell had become heavy handed with league discipline. The NFL had become a multibillion industry and dividing the league’s revenue among the owners and players also were one of the stumbling blocks in getting a new deal done. At the same time growing concern over the effect of playing football had the players’ association demanding better retirement packages. Eventually a deal would be worked out, before any games in the regular season was affected.

As the dust settled on the labor battle a new potentially more crippling crisis emerged, as several former players filed a class action lawsuit against the league alleging the NFL knew of the damage caused by head injuries. This would come to the forefront as several former players, including Junior Seau committed suicide due to the effects of Chronic Traumatic Encephalopathy (CTE). This led Roger Goodell to take a hard stance on hits to the head, as the league began throwing more penalties and handing out fines and suspensions for “aggressive play” in order to increase player safety. This included the unprecedented year long suspension to New Orleans Saints Coach Sean Payton and Defensive Coordinator Gregg Williams. Goodell also suspended Jonathan Vilma for the 2012 season, but it was ruled that Goodell overstepped his bounds, as former commissioner Paul Tagliabue reduced the suspension.

Discipline continued to be to the sole discursion of Roger Goodell, and created more problems for the league when he gave Ray Rice a two game suspension for a domestic violence incident in an Atlantic City hotel. Goodell and the league were roundly criticized for being too soft and when video of the incident surfaced the league found itself in a major scandal. A scandal that only got worse as several other players were arrested for domestic violence. Goodell tried to come up with a new policy but once the issue exploded it became a major mess for the league and the commissioner and calls began for Roger Goodell to resign his post.

©MMXIV Tank Productions. This site is not affiliated with the National Football League. This site is maintained for research purposes only. Page created on August 11, 2007. Last updated on October 2, 2014 at 1:20 am ET.