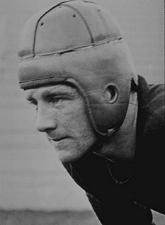 Profile: Born Elmer Francis Layden on May 4, 1903 in Davenport, Iowa, Layden would grow up playing football, becoming an all-state legend at Fullback while at high school. In college he would attend Notre Dame, and along with Quarterback Harry Stuhldreher, halfback Jim Crowley, halfback Don Miller and fullback Elmer Layden had run rampant through opponents’ defenses earning the nickname of The Four Horseman, a group still considered one of the best backfields in College Football History.

After his playing days Layden would become an assistant coach at his Alma Matter, eventually taking over as Head Coach in 1933 a few years after his legendary mentor Knute Rockne was killed in a plane crash. Layden would lead the Irish for seven years in which they were perennial top ten finishers.

Elmer Layden would leave Notre Dame to become Commissioner of the NFL, a post that had been renamed upon him taking the job. In 6 years as Commissioner Layden would see the NFL through the tough war years, in which teams had to use a bunch of rag tag players as replacements, while most of the regulars were fighting in the war. During this period a few teams temporarily merged due to lack of manpower. The Cleveland Rams ceased operations for a year, while the Brooklyn Dodgers were forced to fold. When the war ended, and exhausted Layden would step down.

After retiring in 1946 Elmer Layden would have successful career in the business world before dying at the age of 70 on June 30, 1973.