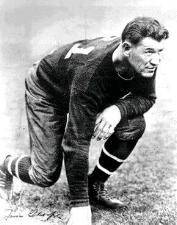 Profile: Jim Thorpe was born on May 28, 1887 in a one-room cabin in Oklahoma. Although there is much confusion on Thorpe’s date of birth, this is the date according to his estate. His very existence was an excellent representation of the melting pot that was America. He had some French and Irish blood but he was of mostly Sac and Fox Indian heritage. His Indian name, Wa-Tho-Huk, translated to “Bright Path”, something that Thorpe definitely had ahead of him.

The career biography of Jim Thorpe reads like an encyclopedia of sports, encompassing virtually every major athletic event available. In the 1912 Olympic games, he won both the pentathlon and decathlon events, in the same year. However, because he played semi-pro baseball his was stripped of his medal by the International Olympic Committee.

Prior to the Olympics he led his Carlisle Indian School team to the national collegiate championship, scoring 25 touchdowns and 198 points. Following the Olympics, Thorpe went on to play six years of Major League Baseball. Meanwhile, he managed to lead the Canton Bulldogs football team to unofficial world championships in 1916, 1917, and 1919.

In 1920 when a new professional football league known as the American Professional Football Association, with teams gaining entry via a $100 entry fee. Thorpe would pay the fee, and to give the league a public face, he was made was the league’s first president. However, after just one year Thorpe stepped down to concentrate on playing and running the Bulldogs.

When he eventually finished his playing days in 1928 with the Chicago Cardinals, Jim Thorpe had become an athletic attraction that crowds flocked to see. In 1950, the nation’s press selected Jim Thorpe as the most outstanding athlete of the first half of the 20th Century.

After his professional sports career ended, Thorpe lived in abject poverty. He worked several odd jobs, struggled with alcoholism, and lived out the last years of his life in failing health. Thorpe would die at the age of 65 on March 28, 1953. Even after his passing his legend lived on, as countless awards are named after him, as he was an inaugural member of the NFL Hall of Fame in 1963. The Hall of Fame was built in Canton, where Thorpe led the Bulldogs to earl professional championships. Thorpe was still making news 30 years after his death as his estate was given back the gold medals he was unjustly stripped of in 1912 by the IOC. Even as the 20th Century ended he was still considered by many the greatest athlete of the century, assuring his name would live on forever.