1979/80: As with other WHA teams that joined the NHL, the Nordiques were allowed to retain only three players (with the rest placed in a dispersal draft). Thus becoming an expansion team again, and marking the NHL’s return to Quebec City 60 years after the Bulldogs left for Hamilton. That first year in the NHL would be a rough one for the Nordiques, who finished in last place with a record of 25-44-11.

1980/81: Rookie Peter Stastny would have an immediate impact upon joining the Nordiques as he captured ten Calder Trophy while posting 109 points as the Nords made the playoffs with a record of 30-32-18. However, in the playoff, the Nordiques would find themselves in a quick 0-2 hole after losing the first two games of a five-game series to the Flyers in Philadelphia. The Nords would win the next two games in Quebec, but would eventually fall in Game 5 as the series returned to Philly.

1981/82: The Nordiques would make the playoffs again while finishing in fourth place with a record of 33-31-16. Facing their Provincial Rival the Montreal Canadiens in the first round, the Nordiques would stun their more famous rivals in five games with an overtime goal by Dale Hunter in Game 5 at the historic Montreal Forum. In the Adams Division Finals, the Nordiques would stun another original six team as they beat the Boston Bruins in seven games. However, the Nords would run out of gas in the Wales Conference finals as they were swept in four straight games by the New York Islanders who were on their way to their third straight Stanley Cup.

1982/83: Coming off a trip to the Conference Finals, the Nordiques remained a playoff contender despite only posting a 34-34-12 record that landed them in fourth place. In the playoffs, the Nordiques would be unable to match their magical run as they fell to the Boston Bruins in four games.

1983/84: The Nordiques would show some improvement in the regular season as they climbed up to third place while posting a record of 42-28-10. In the playoffs, the Nords continued to play strong hockey as they swept the Buffalo Sabres in three straight games. However, in the Adams Division Final, the Nordiques would fall in six games in their much-anticipated rematch with the Montreal Canadiens.

1984/85: The Nordiques would battle their PQ rival Montreal Canadiens all season for first place falling three points short of their first division title in the NHL with a record of 41-30-9. In the playoffs, the Nordiques would survive a shoot out with Buffalo Sabres winning in five games despite allowing 18 goals in the final three games. Facing the Canadiens in the Adams Division Finals, the Nordiques would burn the Habs in overtime three times, including in Game 7 on a goal by Peter Stastny to reach their second Wales Conference Finals. However, in Nords would fall in six games to the Philadelphia Flyers.

1985/86: Led by 100-point season from Peter Stastny and Michel Goulet, the Nordiques win their first division title since joining the NHL by posting a solid record of 43-31-6. However, in the playoff, the Nordiques defense would spring a leak as they were stunned by the Hartford Whalers in three straight games, allowing nine goals in the series Game 3 finale.

1986/87: Le Colisse de Quebec would play host to a two-game summit series of NHL All-Stars facing the Soviet Union Team called Rendezvous ’87 that was held instead of the league’s annual All-Star Game. The two teams would split the games, as Quebec City was the center of the hockey universe for a short time in February. However, Le Nordiques would not look as shimmering as they fell to fourth place with a 31-39-10 record. Despite their disappointing record, the Nords would make the playoffs where they would get revenge on the Hartford Whalers by beating them in six games. However, in the Adams Division Finals, the Nords would fall in a seven-game war against the rival Montreal Canadiens.

1987/88: The Nordiques would struggle all season missing the playoffs for the first time in eight years while finishing in last place with a dreadful record of 32-43-5.

1988/89: The Nordiques struggles would continue as they finished in last place and missed the playoffs for the second straight season with a league-worst record of 27-46-7.

1989/90: After a comeback with the New York Rangers, the Nordiques bring French Hockey legend, Guy Lafleur, who was already a member of the NHL Hall Of Fame as a member of the Montreal Canadiens, home to Quebec. However, it would be a year of transition for the Nordiques as Peter Stastny, and Michel Goulet are dealt away as the Nords post an awful franchise worse record of 12-61-7.

1990/91: Clearly amid a youth movement, the Nordiques experiment in having 21-year old Joe Sakic serve as Captain. Sakic would struggle with the added responsibility as the Nordiques finished dead last again with a hideous record of 16-50-14, as Guy Lafleur made his final goodbye to hockey.

1991/92: The Quebec Nordiques hit rock bottom as a franchise as first-round draft pick Eric Lindros refuses to play in the French-speaking city. While Lindros refused any offer from the Nordiques, the team continued to struggle finishing in last place for the fifth year in a row with a record of 20-48-12. Following the season as the draft approached, the Nordiques were forced to trade away Eric Lindros. Of course, they managed to mess that up to as they agreed on two separate deal one involving the New York Rangers and another involving the Philadelphia Flyers. An arbitrator was asked to come in and ruled the Flyers deal was agreed upon first. The Nords would receive Peter Forsberg, Steve Duchesne, Kerry Huffman, Mike Ricci, Chris Simon, Ron Hextall, Jocelyn Thibault, a first-round pick in 1994, and cash in exchange for the OHL star.

1992/93: Joe Sakic would once again be named team Captain as the Nordiques young players began to show promise as both Sakic and Mats Sundin topped 100 points. At the same time, the Nordiques completed the best single-season improvement in NHL history, finishing in second place with a solid record of 42-27-10. In the playoffs, the Nordiques would get off to a fast start beating the Montreal Canadiens in the first two games at Le Colisee. However, the Habs would rebound to win the next four games, including taking two in overtime to claim the series and start another run at a Stanley Cup Championship, which included ten overtime wins.

1993/94: Coming off their solid season, the young Nordiques would suffer a setback as they struggled all season with injuries and missed the playoffs with a disappointing record of 34-42-8.

1994/95: After taking a step backward, the Nordiques trade budding star Mat Sundin to the Toronto Maple Leafs for Wendell Clark and Sylvain Lefebrve in a move to add veteran experience and toughness to the young team. In addition, the Nords would name Marc Crawford as the team’s new coach. However, whether it would work or not was put on hold as the NHL endured a four-month lockout. When the season started, the Nordiques were one of the strongest teams as they finished with a 30-13-5 record that was the best record in the Eastern Conference. Helping to lead the way is Peter Forsberg, who captures the Calder Trophy in a successful rookie season that saw him score 50 points in 47 games. However, as the playoffs began, the very future of the Nordiques was in doubt as owner Marcel Aubut announced he needed a bailout from the Provincial Government to keep the team operating in Quebec for the following season. With rumors of a move floating over their heads, the Nordiques would stumble in the playoffs losing in six games to the New York Rangers. The troubles were too much for Aubut to overcome, as the bailout was not approved, and he was forced to sell the team to investors in Denver, who moved the team to Colorado. Once in Colorado, the team would change its name to Avalanche and would go on to win the Stanley Cup in their first season in the Rocky Mountains. Gone but not forgotten fans in Quebec celebrated almost as if they were still the Nordiques.

1995-Present: The Nordiques began a series of movements for the former QHA teams as over three years, three of the four former WHA teams would relocate, leaving just the Edmonton Oilers behind to wave the league’s banner. The Nords moved also singled a troubling sign for the NHL in which teams with a loyal fan base still had to move because they could not compete with the big market and escalating contracts. The following year would see the Winnipeg Jets land in Phoenix, giving the NHL more teams in the Sunbelt then in Canada, something once thought of as unthinkable. The battle that began in the Nordiques final season with a lockout that took away half of the season would come to a head ten years later with another lockout that wiped out an entire season. After the lockout, the NHL came back with a salary cap once again, giving hope to loyal Canadian Markets that lost teams that the NHL may someday return. Although unlike Winnipeg, Quebec City has yet to build a new arena instead of choosing to renovate Le Colissee, which was briefly used as an AHL affiliate for the rival Canadiens.


Means people of the north and the committee named them Nordiques (then in the WHA) because they were one of the northernmost team in pro hockey at 52 degrees North. 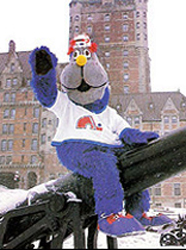 ©MMXIV Tank Productions. Stats researched by Frank Fleming, all information, and team names are property of the National Hockey League. This site is not affiliated with the Quebec Nordiques or the National Hockey League.This site is maintained for research purposes only. All logos used on this page were from Chris Creamer’s Sports Logos Page.
Page created on February 17, 2003. Last updated on March 12, 2014 at 11:50 pm ET.