2017/18: It was bound to happen sooner or later, but would it be successful? Professional sports in Las Vegas was a gamble; that no league was willing to try until the NHL stepped forward made the Vegas Golden Knights their 31st franchise. Days before the Knights were set to play their first game, the city of Las Vegas was shaken to its core when 58 people were killed a mass shooting at a country music festival. The Knights would dedicate their first season to those lost in the massacre and retired the #58. Coached by Gerard Gallant, the Golden Knights began the season on October 6th, beating the Dallas Stars 2-1, James Neal scored both goals for Vegas. One night later, they got their first overtime win, 2-1 over the Arizona Coyotes as Neal scored the game-winner.  On October 10th, Las Vegas finally had a home game, as a sold-out crowd came out to welcome their team, as the victims were honored on an emotional night at T-Mobile Arena. Tomas Nosek scored the first home goal as James Neal added two others in a 5-2 win over the Coyotes. The Knights played well early in the season, winning eight of their first nine games. They may have been an expansion team, but they ended up with a solid team thanks to salary cap issues and the expansion draft rules that allowed them to pick up Marc-Andre Fleury, who had won three Stanley Cups with the Pittsburgh Penguins. November would see the Knights come back to the pack some, but they still managed to play well at home, taking three of four games at T-Mobile Arena. The Knights began December with a 7-4 loss to the Winnipeg Jets. They would not lose in regulation again until January 4th. A 13-game point-scoring streak saw Vegas hold the NHL’’s best record as the New Year began at 26-9-2. It was clear by now that the Vegas Golden Knights were not an ordinary expansion team. On February 1st, 50 games into the season, they had assured themselves of being the expansion team with the most wins in NHL history as they sat at 34-12-4. Vegas would also top the record for points as an expansion team as they spent most of the season atop the Western Conference. Vegas clinched the Pacific Division on March 31st and ended the season at 51-24-7. As a result of the Knights division title, Gerard Gallant won the Jack Adams Award, given to the Coach of the Year. William Karlsson was the team’s leading scorer with 78 points, also scoring a team-high 43 goals.

2018 Playoffs: In the playoffs, the Vegas Golden Knights faced the Los Angeles Kings, fans watching at home were treated to a show before the game, as a Game of Thrones-style intro had become part of the charm of the NHL in Las Vegas. Marc-Andre Fleury was at his best stopping 30 shots as the Knights won the opener 1-0. Game 2 at T-Mobile Area saw the Golden Knights first playoff overtime game. The Knights dominated on the ice but needed 56 shots to win 2-1 on an Erik Haula goal in double-overtime. With two goals in 21 seconds, the Knights won their first road playoff game 3-2. They would complete the sweep of Los Angeles with a 1-0 win in Game 4, as Fleury made 31 saves in a shutout. Vegas moved on for a showdown with the San Jose Sharks in the second round. The opener saw the Knights at their best as seven different players scored in a 7-0 win, with Marc-Andre Fleury stopping 33 shots.  The Sharks bounced back to win in Game 2 in double-overtime 4-3. Game 3 in San Jose also went into overtime; this time, it was Vegas getting the win as William Karlsson scored at 8:17 of sudden death. The Knights suffered their worst performance in Game 4, losing 4-0 as the series went back to T-Mobile Arena, even at two games apiece. In Game 4, Alex Tuch scored twice, as the Knights held off a late rally by the Sharks, 5-3. In Game 6, it was all Marc-Andre Fleury as the Knights won 3-0 with Fleury getting his fourth shutout of the playoffs. The Vegas Golden Knights would meet the Winnipeg Jets in the Western Conference Finals. The Jets took the opener 4-2, but Vegas bounced back to with a 3-1 win in Game 2, as Jonathan Marchessault scored twice. Marchessault scored two goals again in Game 3 as the series moved to Vegas, with the Golden Knights winning 4-2. The Knights would go on to take a commanding 3-1 series lead, with 3-2 win in Game 4, as Fleury made 35 saves, with Reilly Smith netting the game-winner with seven minutes left in the third period. Back in Winnipeg in Game 5, Fleury flourished again as the Knights won 2-1 to earn a trip to the Stanley Cup Final.

2018 Staley Cup Final: By now, the Vegas Golden Knights had become the best story in the NHL born of expansion, they had become the heart and soul of Sin City in just one year. Now they were four wins away from an improbable championship. An expansion team in the Stanley Cup Final was matched up against the Washington Capitals, a team that had teased their fans for years, only to bring heartache every season. Game 1 at T-Mobile Arena would be a back and forth battle, with Tomas Nosek scoring twice as the Golden Knights won 6-4. The Capitals bounced back with a 3-2 win in Game 2 as the series shifted to Washington. The Knights appeared to be running out of gas as they suffered a 3-1 loss in Game 3. By Game 4, it was clear the Capitals were in control of they won 6-2 to take command of the series. Facing elimination for the first time in Game 5 at home, the Knights hoped to keep the dream alive. However, two unanswered goals in the third period saw the Capitals skate home with the Stanley Cup, following a 4-3 win.

2018/19: What could the Vegas Golden Knights due for an encore after reaching the Stanley Cup Final in their inaugural season? Perhaps suffering a bit of a hangover, the Knights got off to a slow start, losing three of their first four games to start the season. As the holidays began to approach, the Golden Knights were looking more like a second-year team than a playoff contender as they held a record of 9-12-1 on November 19th. With Max Pacioretty an offseason acquisition scoring in overtime, the Knights beat the Arizona Coyotes 3-2 in overtime on the night before Thanksgiving. This seemed to launch Vegas’ season as closed the month with five straight wins. After a strong December, the Golden Knights were back on track as the New Year began, holding a record of 23-15-4, while in the middle of a seven-game winning streak. While the season had its peaks and valleys, the Golden Knights’ second year was solid, as they finished third in the Pacific Division with a record of 43-32-7. Jonathan Marchessault was the team’s leading scorer with 59 points and a team-high 25 goals.

2019 Playoffs: The Vegas Golden Knights would go up against the San Jose Sharks in the first round of the playoffs. After suffering a 5-2 loss in Game 1, the Knights bounced back with a 5-3 win as five different players lit the lamp for Vegas. As the series shifted to T-Mobile Arena, the Knights looked to seize control and got two goals from Paul Stastny and Mark Stone to win 6-3. They would also record a 5-0 win in Game 4 and looked poised for another long postseason run. However, the Sharks fought back, taking Game 5 by a score of 5-2. With a chance to close the series at home, Vegas suffered a 2-1 loss in double-overtime in Game 6 as Tomas Hertl scored a stunning shorthanded goal to win the game for San Jose. The Knights held a 3-0 lead heading into the third period of Game 7, but the Sharks again fought back, scoring four goals to take the lead, Jonathan Marchessault scored with 47 seconds left to send the game to overtime. However, the Sharks with a goal Barclay Goodrow won the game 5-4 to take series and end the Knights’ season.

Vegas Knights in the Castle 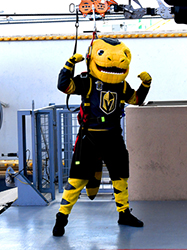 ©MMXX Tank Productions. Stats researched by Frank Fleming, all information, and team names are property of the National Hockey League. This site is not affiliated with the Vegas Golden Knights or the NHL. This site is maintained for research purposes only. All logos used on this page were from Chris Creamer’s Sports Logos Page.
Page created on Page created on November 22, 2016. Last updated on February 6, 2020 at 11:50 pm ET.