1876: The Louisville Grays were one of the eight charter franchises in the National League. The Grays were owned by businessman Walter Newman Haldeman, owner and publisher of the Louisville Courier-Journal newspaper. Managed by Jack Chapman, the Grays were in the middle of the pack in the National League’s inaugural season, finishing in fifth place with a record of 30-36. Jim Devlin was Louisville’s star pitcher, starting all but one of the Grays’ 69 games. Devlin would finish with a record of 30-35 with an ERA of 1.56. The Grays leading hitter was Chick Fulmer, who hit .273 with 29 RBI.

1877: The Louisville Grays were significantly better in their second season. Jack Devlin continued to be the Grays durable man on the mound pitching every inning during the season, while posting an ERA of 2.25. The Grays leading hitting was Joe Gerhardt who batted .304 with 35 RBI, while Orator Shafer had three home runs and 34 RBI. On August 13th, the Grays were on top of the National League standings with a record of 27-13 when suddenly they went into a tailspin losing seven straight games. During the streak Team President Charles Chase received a telegram saying gamblers were favoring the Brooklyn Hartfords in an upcoming series. The second telegram predicted Louisville would throw the game against the Hartfords on August 21. The Grays committed a number of suspicious errors in the game and lost 7-0. League President William Hulbert investigated and ordered players to authorize Western Union to release all telegrams sent or received during the 1877 season. All players complied except shortstop Bill Craver, the team’s captain. The telegrams indicated that Jim Devlin, George Hall, and Al Nichols intentionally lost games in exchange for money. No direct evidence was found implicating Craver. All four were banned from baseball for life, Craver for refusing to comply with the investigation. The Grays would go on to finish the season in second place with a record of 35-25, but due to the gambling scandal the team would be expelled from the National League and folded. 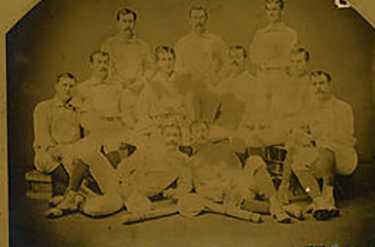 ©MMVI Tank Productions. Stats researched by Frank Fleming, all information, statistics, logos, and team names are property of Major League Baseball. This site is not affiliated with the Louisville Grays or Major League Baseball. This site is maintained for research purposes only. All logos used on this page were from Chris Creamer’s Sports Logos Page.
Page created on July 6, 2016. Last updated on July 6, 2016 at 11:45 pm ET.