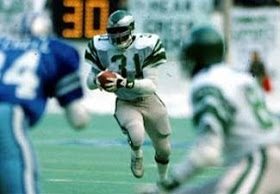 Wilbert Montgomery carries the Philadelphia Eagles to their first Super Bowl as he rushes for 194 yards with one touchdown in a 20-7 win over the Dallas Cowboys in the NFC Championship Game at Veterans Stadium. The Eagles help the City of Philadelphia complete a magical year where all four teams played in the finals of their league, with the Phillies winning the World Series. The Eagles would lose Super Bowl XV mush like the Flyers lost the Stanley Cup Finals, and the 76ers lost the NBA Finals in 1980.