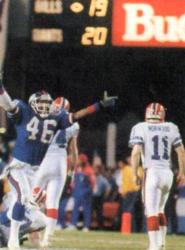 In the greatest Super Bowl to date, the New York Giants stunned the Buffalo Bills 20-19 in Super Bowl XXV in Tampa. The Bills came in with an unstoppable offense. The Giants played with backup quarterback Jeff Hostetler and decided the best way to stop the Bills was not to allow them to get the ball. The Giants, with a time of possession over 40 minutes, succeeded as Scott Norwood missed a potential game-winning field goal. Otis Anderson, with 102 yards rushing with one touchdown, would be named Super Bowl MVP.