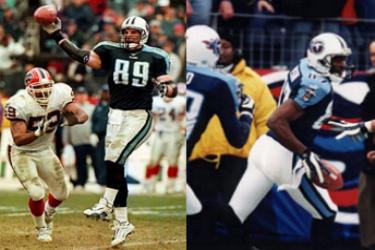 The Tennessee Titans stun the Buffalo Bills 22-16 in the Wild Card Round at the Adelphia Coliseum in Nashville. The game the first playoff game of the 21st Century had a thrilling fourth quarter, with the lead changing four times. After the Bills took the lead with 16 seconds left, the Titans won on a kickoff return lateral play called “Home Run Throwback.” The play was set up by Frank Wycheck throwing across the field to Kevin Dyson, who went 75 yards to win the game in what would be called the “Music City Miracle.”
For More See Barstoolsports.com