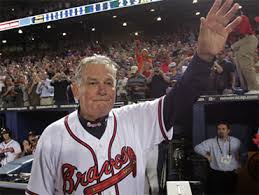 It is a bittersweet end for longtime Atlanta Braves manager Bobby Cox as his team is eliminated by San Francisco Giants in the Division Series in four games. In the finale, the Giants behind the pitching of rookie Madison Bumgarner 3-2. As the game came to an end, Cox was given a standing ovation by the crowd at Turner Field and the opposing Giants, as he retired after managing the Braves for 20 years. In 29 seasons as manager, Bobby Cox posted a record of 2,504-2,001.